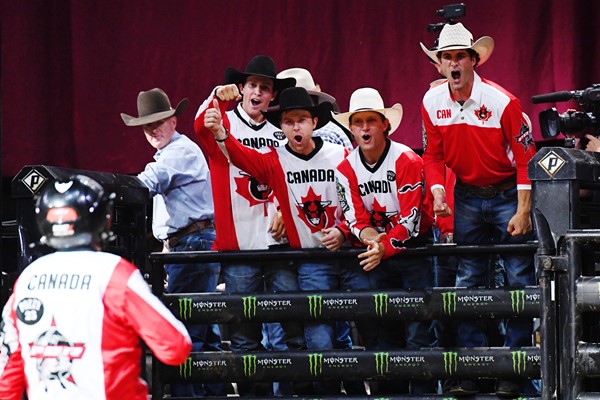 NEW YORK CITY – When Team Canada traveled to Sydney, Australia in June 2018 for the second edition of the PBR Global Cup, they had one thing on their mind – redemption.

After the Global Cup debuted on home soil in 2017 inside Rogers Place in Edmonton, Alberta, despite a valiant effort on the opening night by the Canuck contingent, which led them to the top of the leaderboard, they couldn’t hold off a hard-charging Team USA, who eventually won the event.

Sliding from first to third by event’s end, Team Canada refused to settle for anything less than a win in Australia, wanting nothing more than to hear “O Canada” sung throughout the stands of Qudos Bank Arena.

“We lost our home dirt in Edmonton and I know for a fact there's nobody on our team that's coming here for second place,” Tanner Byrne said prior to the team’s departure. “We're coming to show the world what we got. Don't expect anything other than first.”

Three-time PBR Canada Champion Aaron Roy returned as the nation’s coach, with Dakota Buttar, Lonnie West, Zane Lambert, Byrne, Brock Radford and alternate Justin Lloyd all earning their second qualification to the roster. The eight-man roster, however, included two new faces in Jared Parsonage and Wacey Finkbeiner who was selected days prior to the event to replace an injured Jordan Hansen.

“Every event I’ve been to, every guy on the team has been killing it,” Roy reflected as the Global Cup in Australia neared. “And that’s what we want right before we left to go here, is guys to get hot.”

Beginning the event on a hot note, Team Canada covered their first four bovine athlete opponents in Round 1. Collectively amassing a 7-for-9 record by night’s end, the Canucks were positioned fourth on the leaderboard ahead of the final day of competition, 107.25 points behind leading Team Brazil.

“We are definitely still in this thing,” Coach Roy said from the lockeroom. “It’s just stay on your bulls. It’s going to come down to whoever stays on the most bulls. We’re right in this thing. It’s nobody’s game right now.”

And while their overall positioning may not have been what they desired, strong performances from Byrne and Parsonage left the team and fans around the globe assured that Team Canada could come-from-behind to win the event.

For Byrne, his 79.5-point trip on Annihilation earned him a selection to the Bonus Round, while Parsonage earned the nation’s second position after he covered Jack Rabbit for 68.5 points.

Both men then remained perfect, logging their second 8-second efforts – an 83.5-point ride aboard SweetPro’s Hillbilly Deluxe for Byrne and 82.25-point trip atop Bring The Action for Parsonage.

“Jared is a big sleeper,” Coach Roy added mid-event. “He hardly ever bucks off. He gets the job done every time, and he does it over 50 percent of the time. He’s a guy I lean on pretty hard for this team.”

As forecasted by Roy, not only would Team Canada rally on the second day of competition in an event that was “nobody’s game,” but consistency would prove key.

Per competition guidelines, the event winner would be determined by the nation’s Top 12 scores from their 18 outs. Adding six scores on the final day of action, bringing Team Canada’s collective record to 13-for-18, they were one of three nations to surpass the threshold of countable scores meaning the lower ones would fall from their total.

Contributing three of those qualified rides, Byrne and Parsonage continued to be top performers for the nation as they concluded the Global Cup Australia with perfect records.

Parsonage’s 3-for-3 showing was capped by an 80.5-point ride on 5th Battalion.

Byrne, however, finished 4-for-4, again earning the nod from Roy to represent Canada in the bonus round. First riding Light Em Up for 82.5 points in Round 2, the Prince Albert native’s flawless campaign was punctuated by an 86-point trip on SweetPro’s Fully Locked & Loaded.

“I was lucky that Aaron trusted me enough to put me on those two bonus bulls,” Byrne said. “For me, it was definitely a win, I felt really solid and got going really well.”

“I had fun doing it. [I] was fortunate enough my team and my coach believed in me enough to put me in that pressure situation and ride those short rounds.”

While not the main focus of the event, both Parsonage’s and Byrne’s stellar efforts allowed them to finish Top 6 in the individual aggregate.

As one of two riders to go 4-for-4, Byrne finished second, a slim 2.5 points behind winner Kaique Pacheco, while Parsonage was sixth.

In the ever more important team race, despite the perfection from Byrne and Parsonage, and the efforts from the remainder of the contingent, Team Canada fell short of the win, finishing third to Team Brazil after a three-nation slug-match emerged between Canada, Brazil and runner-up Team Australia.

With Brazil and Australia both amassing 15 scores, Canada’s top marks from their 13 qualified rides left them 19.75 points shy of the victory.

“We did all we could, we rode all of our bulls,” Roy said. “Maybe we should have taken a re-ride, but there was only three teams to ride all of their bulls and we were one of them.”

Fans can relive all the action from the 2018 PBR Global Cup Australia, including the perfect efforts by Byrne and Parsonage, on RIdePass at RidePass.com or via the mobile app.