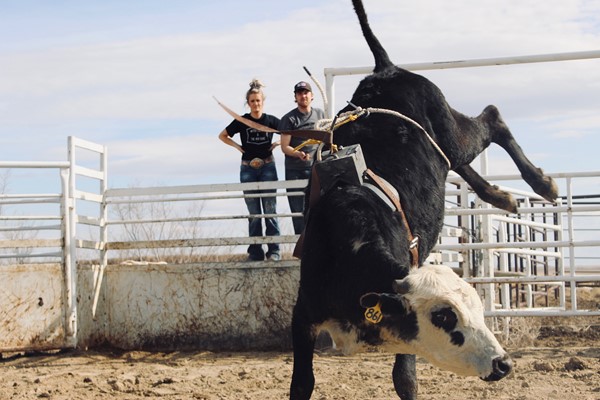 AIRDRIE, Alberta – Dakota Buttar is undeniably one of the best bull riders to emerge from Canada in recent memory.

With the season currently on pause, however, Buttar has turned his focus to another side of the industry, working his herd of bucking cows and bulls at his new home in Eatonia, Saskatchewan.

Buttar first got into the stock contracting business at age of 15 when he purchased a bucking cow calf out of a cow he rode in his steer riding days from Tom Thielen.

Not only does Buttar love the look of the grey brahma stock, but the blood lines have a sentimental value to the now 27-year-old.

“For her, there was some sentimental value there cause of the success I had seen on her mom,” Buttar explained. “The cow I bought I saw at some rodeos, the cows were hauled to all the rodeos and she was born on the road. I loved that calf because she was a little grey pretty thing.”

“The first time I got on her she bucked really hard and slammed me in the dirt,” Buttar elaborated.

“I rode her twice after that though. I won one rodeo and then the other time I rode her was in the Chinook Finals in the final round, won the round and won the finals on her. When she was bucking, she was one of the rankest bucking cows in Canada. She had those bloodlines from A56 Tejana’s Back, I have always loved those bloodlines.

Still new in the business, with just a couple years of experience breeding and raising bulls, Buttar admits he is learning something new every day.

“I am still new to it all. I have had them for a handful of years, and I have only had a couple that I have sold for bucking bulls,” he said.

“For me I just pick a bull for the way he looks and what he does in the arena and put him on cows. I am trying my best to pick out the ones that work and don’t work. I have been learning a lot more the last couple of years, creating a bigger herd where I can flank bulls different ways and try some new things here and there. It is all a big learning process for me.”

And that learning curve hasn't come without help.

Stateside, Buttar has used the expertise of Cord McCoy, the bull rider turned stock contractor who has such World Championship caliber bulls as Mr. Majestic, and looks up to operations like that of H.D. Page, whose current standout three-time YETI PBR World Champion Bucking Bull SweetPro’s Bruiser makes headlines at nearly every event he competes at.

North of the 49th parallel, Buttar uses the expertise of Derek Adams and Kendal McDonald.

“Derek has raised a lot of good bulls that came out of Canada, and Kendal is really making a big name for himself with a lot of good bulls and big money winners,” Buttar said. “I talk to those guys quite a bit up here asking about what I should be doing, flanking and things like that.”

“Keep trying different things. If one thing doesn’t work with one, something else might. You can’t judge an animal on their first handful of trips. They all mature differently and I have seen that myself when I thought a couple weren’t going to be very good, but then they surprise me a few trips down the road.”

With these outfits to look to, Buttar also places great significance on the support he receives from his team in Eatonia, instrumental in his high confidence for what the future holds for his bucking bull operation.

“We all get along so good Chad and Dave [Becker] and myself. We get in our groove and we don’t need to get telling each other what to do. We just kind of get going, and know what our job is. Everything flows really well with everyone.”

“When you have a good group of people and things flow good it really helps keep the animals with level heads, nobody gets worked up, it works out pretty good for them too.”

Buttar’s long term goal is to not only have a handful of bulls that are PBR quality while he is still competing, but also a larger more fruitful operation for whenever he hangs up his bull rope.

“For now its’ a hobby, but it’s something I really enjoy,” Buttar said. “This is a really tough business to get into to make a living. Bucking bulls will always be a part of me. Whether I have one or two or a dozen or two.”

“After I’m done riding, I don’t want to leave, so if I can have some bulls that let me keep coming to events, I want a part of that.”

Looking to the future, albeit a much nearer future, Buttar has a crop of two-year-old bulls that excite him.

Coming from the first bull that his first bucking cow he purchased produced, Buttar says they seem to all have that same prowess in the arena and he is optimistic that there might be a couple PBR caliber bulls on their way up.

“That bull has a quirky attitude and personality to him. Some of the calves are showing that too. He is basically the real life Ferdinand, really big and intimidating, but he is a like a gentle giant,” Buttar said.

“There are some other ones that you can’t trust that will sneak up on you and get to hooking you, but they all have a similar pattern in the arena, they all want to kick hard and turn back,” Buttar continued.

“I haven’t bucked them in a little while, but we bucked them last week and I was really happy with what I saw. I am hoping I can get a little routine going for them and bucking them every so often and see what they can learn.”