Behind The Chutes – Chris Cooke 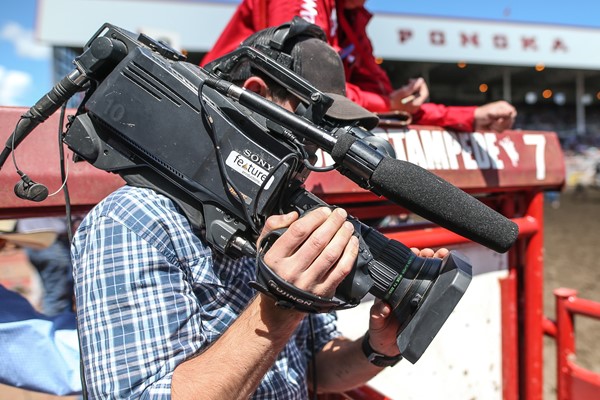 PBRCanada.com: How did you come to be involved with event production and launching Feature Productions?

Chris Cooke: Feature Productions was created in 2008 to fill a niche in the live event production market. At the time, there was a huge gap between the high-end broadcast shows that aired on network TV and the video production that you might see if you attended an event such as a bull riding, a rodeo or a WHL hockey game. We wanted to bridge that gap and provide event promoters with a video production solution that would rival the quality seen on network TV, while making it affordable, yet scalable.

PBRC: What pushed you to get involved in western sports specifically?

CC: I personally got involved in Western sports as a kid growing up on a ranch in Swan River, Manitoba. My parents showed quarter horses and we were always around the rodeo scene. I learned to throw and stack hay bales on my grandpa's farm on hot summer days. I remember the refreshing taste of strawberries from grandma's garden and cold fresh cream from their Holstein cows. I learned to work hard and I experienced the joys of benefiting from the work of your hands. That’s a fulfilling feeling that you can’t get any way other than working for it. I guess that’s what I like about Western sports; it’s full of honest people who don’t mind getting their hands dirty and working together for a common goal.

PBRC: Can you tell us a bit about your first PBR event and how it went?

CC: My first time directing the video crew for a PBR event was probably in early 2010 when the PBR came to Lethbridge, where Feature Productions is located. We had just installed a new video score clock and production equipment at the ENMAX Centre and the PBR was the first real test other than WHL hockey for the new gear in that building. I remember testing and re-testing the equipment until we made sure everything was perfect. Back then, the PBR show producer was a larger-than-life character with a big old Texas accent. I had a lot of respect for him. When he wanted something, he wanted it done right and done right now! This was a very different environment compared to other rodeo events that we’d been a part of up to that time. The PBR was the real deal and they were there to put on a world-class show. We ended up developing great relationships with the crew, the stock contractors, the judges, the pickup men and announcers, and these are a lot of the same guys who we work with today. It shows the loyalty and commitment we have to each other.

PBRC: You have an incredible team that supports all the PBR shows, can you tell us about the different roles they fill in a show?

CC: Firstly, I want to say that our team has been developed by my business partner, Steve Prankard. He does an incredible job dealing with all of the logistics of managing our great team.  We have a crew of very skilled guys. They’re also a lot of fun to be around when we travel all over the country together. Some of the positions include director, production audio, replay, graphics, ENG shooter (for gathering b-roll of each city, bull and rider footage, and interviews), shark cage camera, tight follow camera, chute cam 1 (left delivery), chute cam 2 (right delivery) and jib operator. Each crew member has specific rolls that they fill, but we really are a team unit.

PBRC: What is a normal event like for the Feature Productions team from set-up to take down?

CC: Each venue has its own set of challenges, but no matter where we go, we get to work very closely with Blaine Fyson and his steel/dirt crew to make sure that our plans and schedules jive with each other. In an ideal world, we like to arrive before any dirt has gone into the building. That allows us to roll our LED screen cases out just behind the chute line and then start our screen build. As we begin to build the screen, that’s about the time when Blaine yells out, “Are you guys done yet?” to which we yell back with some sort of smart reply and that’s how our day starts out. Once the screen is built and tested, we begin running cables, intercom, lighting, and setting up all the cameras and the jib. A jib is a camera crane that swoops out over the arena to get those beautiful moving high angle shots. The jib setup is probably the most physically demanding and that’s where it’s nice to have some strong backs in our crew to lift all of those heavy counterweights up onto the jib platform. We do all of our run-throughs around noon on show day just to test every position, play every sponsorship video and make sure that we all know what’s happening on that particular night. Once run-through is complete, we’ll do some final tweaks and send out our ENG camera op to grab some scenic shots. There's a final production meeting in the later afternoon and a crew meal before doing some pre-show interviews with riders and before you know it, it’s show time! After the show, all of our camera ops bring their cameras back to the truck and turn around to get the jib off the platform right away so that Blaine’s team can begin tearing out his steel which in turn allows us to tear down our LED screen. It really is quite an efficient process. I’ve got to record a time-lapse of this sometime!

PBRC: What is the most challenging part of a PBR Canada Monster Energy Tour event?

CC: I would have to say that the logistics of managing each venue and travel schedules is the most challenging. We travel all over Canada, which means that our gear needs to get from Abbotsford, British Columbia to Sydney, Nova Scotia and everywhere in between. We’re usually planning for an event that’s three weeks away while we’re on our way to an event that’s happening in three days, so there’s a lot to think about and manage.

PBRC: What is one thing fans would be surprised to know about your role with the PBR?

CC: The reality is that most of the fans probably don’t even know I exist. If I do my job right, they will be too busy having the time of their lives enjoying the show. With that said, once everything is show ready, I often run our replay system, which involves taking all eight camera angles and choosing the best shots to play back in slow motion after each ride. I believe that a good replay operator needs to be a great story teller who can show the audience an angle or a moment in time that they would have otherwise missed.

PBRC: Do you have a favorite city PBR Canada travels to and why?

CC: I absolutely love Alberta and I have to admit that I have a soft spot for my hometown show in Lethbridge. With that said, the most interesting place to travel to is Quebec City. I get to practice my high school French, which is admittedly horrible, and enjoy great food. Abbotsford is a crazy trip because we get to drive for over 1000km across the Coquihalla highway to do a three-hour show and then turn around and drive back home. The first year we went out to Abbotsford, it was the most amazing golf weather you could imagine and they have no shortage of golf courses out there. I remember last year, it just rained the whole time. I guess I didn’t really answer your question of which is my favorite, but I will say that I am a big fan of the country that we live in.

PBRC: The PBR Canada Monster Energy Tour shows have evolved greatly throughout the past five years. What is the next change and/or addition to the shows you would like to see?

CC: I think that we need to start making heroes out of the bulls by giving fans animated graphics and stats on the screens that show how rank these bulls really are. The bulls of the PBR are amazing athletes that love their moment in the limelight more than anyone it seems! Our LED screens are only going to get bigger and better with more fun elements for fans to enjoy when they come to a PBR show.

PBRC: Given your role with the event, you have had a front-row seat to many historical moments. What has been your favorite to witness and why?

CC: That’s true, I’ve seen a number of really amazing moments and had the opportunity to interact with some of the best bull riders and stock contractors in the world. Our crew has even taken the trip down to Vegas to cheer on some of our Canadian stock and riders at the PBR World Finals. When I think of my favourite Canadian moment, it’s more of an inspirational moment than anything. It was at the 2018 Canadian Finals when the already injured Brock Radford got on bull after bull after bull and kept fighting for more. He wanted to win so bad and everyone was pulling for him because of his resilience. You really had the feeling that he would never quit no matter how many times he got stepped on or had to go hobbling out of the arena due to his injured knee. That year, it came down to the final ride of the night with Brock getting on his re-ride bull, Grey Tower (Vold Rodeo). He battled it out with Grey Tower for the final ride of the entire 2018 season for 85 points and the place went crazy. At the end of it all, second place is what he would get for his efforts since Cody Coverchuk had an unbelievable Finals as well, but I will never forget the never-give-up attitude Radford showed that night.

PBRC: How have you been keeping busy amidst the shutdown?

CC: Being in the event business, the shutdown has been challenging for us. The event industry was among the first to get shut down and it sounds like we won’t get back to fully doing events with big crowds again until Phase 3. I’m hopeful that our country and industry will get through this challenge quicker than some have anticipated, but so much is up in the air right now. Every weekend, we look at our calendars and think about the events that we would’ve been at. The Calgary Stampede and Ponoka Stampede are two of the events that I will miss the most this summer. It will seem odd not being in Ponoka on July 1 and then driving to Calgary early in the morning the day after Ponoka ends. We’ve been doing that for years. One good thing about the shutdown is that I’ve had the chance to hang out with my beautiful wife and two daughters. My oldest just turned 15 and my youngest is 12! We’ve been spending a lot of time together biking, hiking, jamming on the guitar and enjoying summer evenings together.