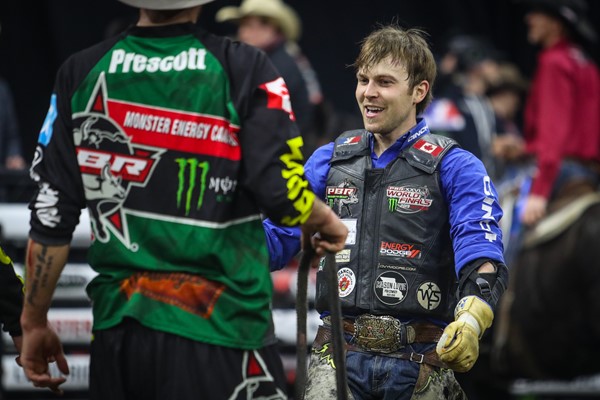 AIRDRIE, Alberta – Dakota Buttar dominated the 2020 PBR Canada Monster Energy Stop in Lethbridge, Alberta, riding all three of his bulls, as well as his 5/5 Bucking Battle bull to remain perfect on Canadian soil in 2020.

Any bull rider will tell you that you need to ride all your bulls to be the best in this game, but Buttar is demonstrating that a change in scenery has done nothing but good for his performance, opting to remain competing in PBR Canada competition.

“That travel was harder on me than anything. It’s a lot nicer when I can get up at noon, leave at one and be at the event in lots of time.”

“If I want to go home and sleep in my own bed I can,” Buttar continued. “Having my buddies around and helping each other on, it’s just a better atmosphere.”

And that atmosphere and attitude has Buttar on the verge of beating the record for the longest riding streak in PBR Canada history since 2015.

The record current record is 11, held by no other than Buttar himself. He achieved the feat through 2018 and 2019, from November to July, respectively.

“It was something I never really thought about, but then people kept talking about it last weekend,” Buttar explained. “It’s cool to accomplish something like that. All weekend people kept bringing it up, and I was more worried about winning the event.

“I want to get as many points each weekend as I can, ride every bull. It sure is pretty cool to keep a streak going that long. It’s not the easiest thing to ride that many in a row.”

While Buttar ended up covering a total of four bovine athletes last weekend, the event culminated with his 86-point ride on a familiar foe in Wild Hoggs Bucking Bulls’ Tykro Pound Sand.

Choosing that particular bull, which also propelled him to a Monster Energy event win in Calgary in January, was an easy choice for the rider rolling into the championship round draft with first choice.

“He is as solid as one comes. I don’t know I have ever seen him have a bad day. He is always at least 86,” Buttar said.

“Up here in Canada contractors don’t get enough credit for how good these bulls really are. For those of us that are from Canada, we know there is a lot of bull power that has left Canada to head down south, so it’s not too often these good bulls stay up here.

“When they get to a certain level guys down there get their eyes on them.”

Buttar admitted immediately after the event that his hand was lodged loose right at the start of the out, and he effectively rode that 8 seconds with three fingers and a bit of rosin.

“Of all the times I have gotten on him, that is the hardest he has ever felt,” Buttar added.

“He worked my hand out of there right out of the chute, and then I was more focused with hanging on than making moves and he kind of dropped me in there a couple times and worked my way out.”

“He feels so good though, you almost can’t do anything wrong, but he gives you enough that you can have fun on him too, and loosen up a bit.”

Ahead of this weekend’s event in Regina, Buttar said the competition in Canada is as good as it’s ever been.

“Everybody is here for a reason, anyone can come out of their shell and steal these shows at any point,” Buttar said. “The last few years it’s always been Brock [Radford] and Jared Parsonage up at the top. When Garrett Green shows up he is really tough to beat, he wants to win every time. Jordan Hansen too,” Buttar said.

“We have some seriously great bull riding talent in Canada. I am excited to see some of these guys coming up, guys like Jake [Gardner], who came out of his shell at Global Cup, and got a lot of confidence rolling forward.”