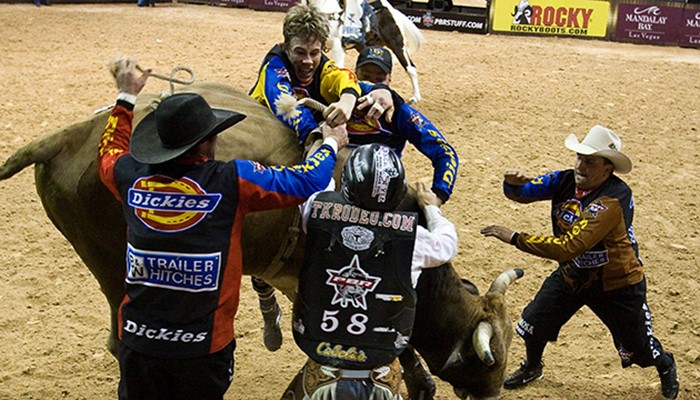 The father to three sons, Bo, Jesse, and Tanner, the next generation of Byrnes continued to charter never before taken courses in Western Sports as each pursued in their own careers in the industry.

And in 2008, the family continued to make history, as Jesse, who followed in Ryan’s footsteps, became the first Canadian to ever work as a cowboy protection bullfighter at a PBR World Finals.

After travelling to Las Vegas in 2007 to compete in a freestyle bullfighting competition held in parallel to the PBR World Finals, the very next season, Jesse made the trek to Sin City as an alternate for the contingent of bullfighters set to work the prestigious, season-culminating event.

In Round 2, however, Jesse quickly went from alternate to active bullfighter when Joe Baumgartner sustained a fracture-dislocation of his right ankle after being stepped on by Spit Fire.

With the injury requiring surgical repair, and a 6-12 week recovery, Byrne was fast in the mix of protecting the world’s best riders from some of the rankest bucking bulls on the planet.

"He didn't try to prove that he belonged there," fellow bullfighter Shorty Gorham recalled. "He didn't try to overdo his job. He just fell into our groove and learned our way-within minutes. He worked a hang up and when it was over I walked up to his dad and I said, 'Don't ever let him change a thing cause this kid's a badass right here.'"

"That's a tribute to his dad," PBR Livestock Director Cody Lambert added. "That's how Ryan was. They just have that personality, where they don't have an ego."

Since his sudden call to action more than a decade ago, Byrne has been a staple member of the PBR Unleash The Beast’s bullfighting contingent.

In 2009, Byrne earned his first out-right selection to cowboy protect at the World Finals, an honor he went on to receive in the ten subsequent seasons, including at the most recent 2019 PBR World Finals.

“It’s a great feeling,” Byrne told PBR.com about his selection prior to the 2009 PBR World Finals. “It’s always been a dream, and for them to validate that is, well, hard to even put words to, really.”

And through the countless saves, and harrowing hang ups in which Jesse has been involved, it has led many to go on record saying he may be one of the greatest ever in the profession.

"I've said before that Rob Smets is the best I've ever seen," Lambert said in 2013, Byrne’s fifth year on the elite tour.

"But it took me 20 years of watching him and him to slow down a little bit and change what he did. I always knew how tough he was, but it took me 20 years before I thought he was that great. I always knew he was one of the all-time greats, and I always thought of him as one of the all-time greats and towards the end of his career I thought he was the best there ever was. Jesse is just getting to his prime and I think of him that way. It's scary how good he is. He's Bushwacker good."

"Greatness takes time, but at his age and the stage of his career, I would say, he's set up to be the best ever," Gorham added. “He earned his way here at such a young age, he's been very healthy, he's as athletic as they get, his bull savvy is among the best and his style and ability will keep him healthy. I think he can do this for 20 years.”

“It’s a long way to the top and once you get there, and get a taste of what it’s like in the big leagues, you work even harder to stay there,” Jesse said of his own successes in 2016. “At this point, my goals are to push myself daily to be a better version of the athlete I was the day before. With experience comes knowledge and with each bull fought there is room to grow. I strive to always keep learning.”

Fans can relive some of Jesse Byrne’s greatest moments today on RidePass. Tune-in at RidePass.com or via the mobile app.