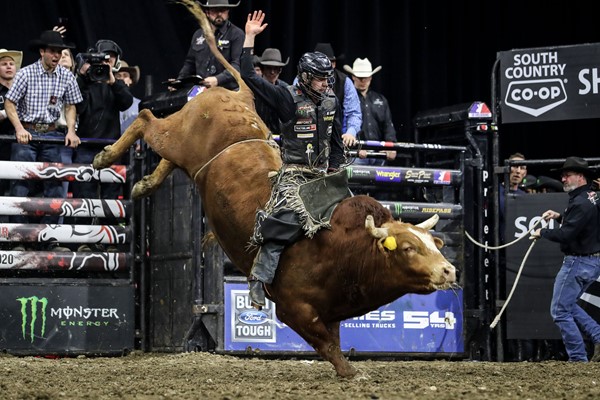 After four seasons of incredible feats of athleticism by both riders and bulls, in 2020 the league heightened the stakes with the addition of the 5/5 Bucking Battle.

Showcased at each two-day Monster Energy Tour event, the 5/5 Bucking Battle pits the Top 5 riders from the Canadian national standings, against the Top 5 bovine athletes at the event, offering both a separate purse and national points.

While the points schedule is fixed, the payout is structured based on how many riders deliver 8-second efforts.

The first 5/5 Bucking Battle was held at the 2020 Monster Energy Tour season-launch event in Calgary, Alberta in late January.

Featuring three riders who were preparing to represent Team Canada at the 2020 PBR Global Cup USA, the first quintet of match-ups was:

Recording what would be the high-marked ride of the entire event, Radford made the 8 aboard Cool Bricks for a massive 89 points to win the first-ever 5/5 Bucking Battle.

Fewer than two months later, at the next stop on the PBR Canada Monster Energy Tour, the 5/5 Bucking Battle returned in Lethbridge, Alberta, for the South Country Co-Op Showdown.

With Green, Radford, Roy, Parsonage and Buttar again the five riders slated to compete in the special round, a rivalry was beginning to brew between one rider and one bull.

For the second edition of the 5/5 Bucking Battle, Radford was again set to face off against X6 Ranch’s Cool Bricks.

Roy would also attempt a familiar bull, albeit for the first time in a 5/5 Bucking Battle.

Drawing Skori Bucking Bulls’ Tom Petty, the three-time PBR Canada Champion found himself in a rubber match, attempting the bull for the third time in his career.

After Roy was bested on the Touring Pro Division in Prince Albert, Saskatchewan in early 2019 by the bull in a quick 2.5 seconds, he responded with a score aboard Tom Petty later that season, marked 84.5 points en route to his victory in Staveley, Alberta at the Glen Keeley Memorial PBR.

For the remaining three riders competing in the Lethbridge 5/5 Bucking Battle, Buttar would look to cover VJV Whiskey Hand, while Green would attempt Vertigo Spy, and Parsonage would face Spooky Lukie.

In similar fashion to Calgary, three riders recorded qualified rides, however, the winner was decided on review, as the packed crowd inside the ENMAX Centre waited on the edge-of-their-seats to see if what would be the high-marked ride of the round was indeed a qualified ride.

Earnign the thumbs-up from the judges, Green was marked 88.5 points atop Vertigo Spy to win the 5/5 Bucking Battle.

In second was Radford, again making the 8 aboard Cool Bricks, this time for a score of 88 points.

Buttar rounded out the Top 3, finishing third with an 86-point trip on VJV Whiskey Hand.

While the 2020 season is currently amidst an unprecedented hiatus, fans can relive all the action from both 5/5 Bucking Battles today on RidePass. Tune-in to the action at RidePass.com or via the mobile app.

The 5/5 Bucking Battles will also be featured in the opening night TSN telecast. Stay tuned to PBRCanada.com for the most up-to-date broadcast schedule.