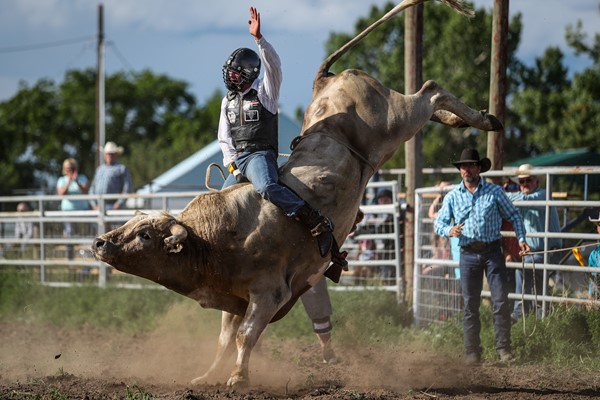 More than 12 jackpot events have been held in Alberta alone since the mid-March shutdown. Photo: Covy Moore/CovyMoore.com.

AIRDRIE, Alberta – There is no question that bull riders love what they do. And if there is a time in history in which that fact is more evident, 2020 would be it.

While PBR set the bar for the return of professional sports in Canada with the resuming competition in Lethbridge, Alberta July 23, the broader bull riding community, which is responsible for the development of bull riders moving from the junior ranks to the professional level has been actively giving riders places to go to hone their craft during the shutdown, all within the COVID-19 health regulations set out by the government.

On the non-sanctioned side of the sport, there have been no less than 12 jackpot-style events for bull riders in Alberta.

In said province, Jett Lambert and his father Kenny put on a nearly $10,000-bull riding jackpot at the start of August that saw 60 bulls bucked in Grand Prairie. Lambert, who is working his way towards his PBR debut said that event was a couple months in the planning.

“We wanted a way to have some fun, there just isn’t much going on. It was to have some fun, see if some guys could make some extra money doing what we love instead of heading down the road for $200. It’s just so much more to get fired up for. Don’t get me wrong, guys are excited to get on the road for almost nothing these days, everyone still wants to get on bulls, everybody loves it.”

This past weekend, Lambert had roughly 10 riders come out for a friendly jackpot at the same spot just outside of Grand Prairie, with PBR Canada standouts such as Jake Gardner, Wyatt Gleeson and Shay Marks making the trip.

Among other events, 24-year-old Wacey Thielen as well as a large group of stock contractors and other stakeholders in the sport, all motivated by the love of the game, put on a four-event series aptly titled the “No Season Season.”

Starting in June in Coutts, Alberta, Kinky Rodeo’s Kyle Larson combined forces with Lazy P Rodeo, and Two Bit Bucking Bulls to put on the first event. Another Jackpot in Coutts in August and two at the Pollockville arena feature PBR Canada Rookie Griffin Smeltzer named the champion after being the most successful across all four events.

“Everyone just got behind it,” Thielen explained. “None of us bull riders had anywhere to go, so we started putting things on so we had something to do that was productive. It was also a deal where we could go and hang out a bit, with guys that were at whatever level.”

“It didn’t matter what level you were at. We had guys from every level, all the way to guys like Dayton Johnston coming out. This is all really for the love of the game. Everybody enjoys going and wants to be there. We aren’t trained for this whole pandemic thing, so we are making the best we can out of a tough situation. That’s all we really can do. We thought that first one at Coutts would have been the only one, but we kept having people asking when the next one would be. So we put the work out to the Coutts committee, and they donated the arena as much as we needed.”

One thing that both Lambert and Thielen stressed was that there was never a lack of stock contractors willing to not only bring bulls, but donate their time and fuel.

“All those stock contractors we had coming were donating their bulls, their time and their fuel. We still have to work to come up with money for paramedics and bullfighters and whatnot, but those guys made it easy because they donated their stuff to us. It’s more than we could even ask for. Curtis Sawyer, Kinky Rodeo, Lazy P, Big Chief/Armstrong, Two Bit Bucking Bulls, it was phenomenal for all those guys to step up and do that for us. We couldn’t ask for anything more if you ask me.”

While there was always just a little bit of added money for the riders to be competing for, typically between $2000 and $5000, one stakeholder in these events that organizers ensured left with a piece of the pie for their work were the bullfighters.

“You can’t put a price on those guys. They have your back no matter what, through thick and thin. That’s a big thing for us. You really want to make sure you are putting some money in their pocket because they are putting it all on the line for us every time,” Thielen said.

“Connor Larrivee really put it out there. Him and Houston Gleeson really put it out there. Both those guys took some dirty shots at that first one we put on in Coutts, I bet they each got run down three or four times. Junior Loring got to one too, and it’s really good to have those PBR caliber guys at these jackpots and in the arena for us. Everybody feels a lot safer. Levi Hale made it to one as well. We couldn’t ask for a better set of guys to call last minute and they would show up every time.”

The sport of professional bull riding is certainly a bit slower, but the drive amongst the athletes to continue to improve their craft is just as active as ever.

Thielen continues to strive to improve while competing in the Canadian Cowboy Association (CCA) and World Professional Bull Riding (WPB) with the end goal of competing for a PBR Canada title.

Meanwhile the 17-year-old Lambert says that being a part of hosting jackpots has been a good way to connect and feed off the drive and success of some of the PBR Canada standouts to one day propel him to the same level within the league.

“I want to push myself to get to that level, I want to go as far as I can. And to do that you can’t not be going right now. How many bulls do you think J.B. Mauney has gotten on to get where he is at? Probably thousands. You have to respect the grind. Just keep on putting it out and keep working and working until you get where you want to be. Thanks to all those guys for coming out continually, being helpful and being rank.”