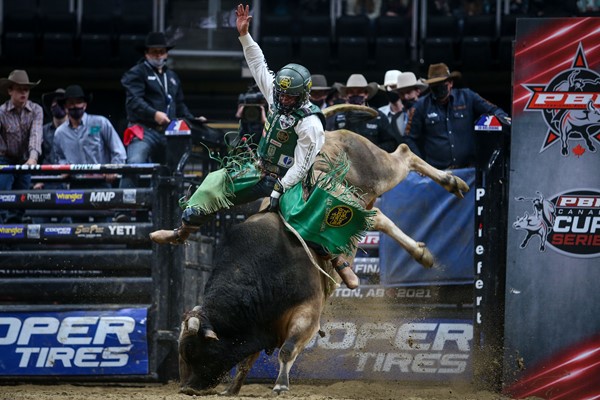 NEW YORK CITY – It is without question that the 2021 PBR Canada season won’t soon be forgotten.

With the record-breaking year concluding with the historic 2021 PBR Canada National Finals, held for the first time ever inside Rogers Place in Edmonton, Alberta, the season was headlined by some of the most cowboy feats of athleticism seen in modern times.

As the 2022 campaign begins to take shape, we look back at the Top 5 rides recorded this past season on Canadian soil – all of which were for 90 points or more!

3 (tie). Nick Tetz rides Al Capone for 90 points on Aug. 21 during the Championship Round of the Touring Pro Division event in Stavely, Alberta

“I show up and do my job,” Tetz said. “I have been riding good, and I have no plans on slowing down right now.”

The 90-point score was one of four rides for the double-entered Tetz at the iconic event, resulting in him both finishing first and second.

Earning a crucial 47 national points, Tetz surged to the No. 1 position in the national standings.

His reign, however, was short lived. Four days after his career-best performance in Stavely, Tetz was involved in a wreck with Kubota Tuff that sidelined him until late October for the Cup Series event in Saskatoon, Saskatchewan. As a result of his time away, Tetz slipped in the standings, concluding the 2021 season ranked No. 15 in the national standings.

3 (tie). Griffin Smeltzer rides Happy Camper for 90 points on Aug. 28 during the Championship Round of the Cup Series event in Lethbridge, Alberta

Much like Tetz, the 2021 season also brought Griffin Smeltzer his first 90-point ride.

Smeltzer remained poised aboard Happy Camper en route to the 8, marked 90 points and finishing fourth in the event.

“He has a lot of up and down, gets underneath himself with lots of timing,” Smeltzer said of Happy Camper.

As the 2021 season continued, Smeltzer reached an additional milestone, his first event win, before finishing a career-best No. 12 in the national standings.

3 (tie). Zane Lambert rides Catch My Drift for 90 points on Aug. 28 during the Championship Round of the Cup Series event in Lethbridge, Alberta

Zane Lambert vs. Catch My Drift. When you see that matchup on a draw sheet, you are keenly aware that something magical is about to unfurl on the dirt.

In 2021, the two titans of the sport went head-to-head four times, with two of those outings ending in monstrous 90-point scores.

Their second meeting of the year was during the season-launch Cup Series event in Lethbridge, Alberta, with Lambert electing to go head-to-head in the championship round.

“I have been on that bull four times, he is always my pick, “Lambert said. “I know what he does.”

“He doesn’t always do the same thing, but if you are looking for high scores, and with the way the average was working that night, you had to be the highest score you could be in that short go.”

“That bull is solid every time, but it’s a bit of a gamble too because that bull does buck really hard and can buck a guy off.”

As the season continued, Lambert climbed aboard Catch My Drift two more times. While both outs ended short of the 8-second whistle, none was more heartbreaking than their out during the championship round of the 2021 PBR Canada National Finals in Edmonton, Alberta.

With a qualified ride all but guaranteeing Lambert his record-tying third national title, he was bested in 4.94 seconds.

As a result Lambert concluded the 2021 season No. 3 in the national standings.

3 (tie). Dakota Buttar rides Norse God for 90 points on Sept. 4 during the Championship Round of the Touring Pro Division event in Ponoka, Alberta

While the 2021 season ended on a low note for Buttar, unable to contend for an unprecedented second consecutive national title on the final day of the season due to a groin injury, his campaign was not without its headlining moments.

One of those was in early September at the Touring Pro Division event in Ponoka, Alberta.

Marking the fifth 90-point ride of his career across all levels of competition, Buttar rode Norse God for 90 points to clinch the win at the Wild West PBR.

The ride launched what would be a three event win streak for Buttar, giving him a firm grasp on the No.1 ranking in the national standings.

Buttar maintained his lead until the final outs of the season, however, forced to the sidelines on Championship Saturday, he was inevitably surpassed by Cody Coverchuk for the 2021 PBR Canada Championship. For the third time in his career, Buttar finished No. 2 in the Canadian standings.

3 (tie). Jordan Hansen rides Catch My Drift for 90 points on Sept. 23 during the Championship Round of the Touring Pro Division event in Prince Albert, Saskatchewan

Jordan Hansen made his 2021 PBR Canada debut in statement fashion.

After spending the majority of the season stateside, chasing a return to the Wrangler National Finals Rodeo, Hansen returned home in time for the late September Touring Pro Division event in Prince Albert, Saskatchewan.

After riding Sure Shot for 85.5 points in Round 1, Hansen was poised to take on a new foe in Catch My Drift in the championship round.

With a propensity to propel riders to monstrous scores, Hansen added his name to the accomplished list of riders to have covered the Two Bit Bucking Bulls’ animal athlete for 90 points.

Hansen reached the whistle for an impressive 90 points and as a result finished second in the event.

The runner-up finish was one of seven Top 10 finishes for Hansen en route to finishing his abbreviated PBR Canada season ranked No. 4.

2. Lambert rides Catch My Drift for 91 points on June 10 during the Championship Round of the Touring Pro Division event in Prince Albert, Saskatchewan

The first event of the new season also featured the first 90-point ride of the year.

Foretelling what would be a rivalry to watch in 2021, Lambert covered Catch My Drift for 91 points to win the title at the Touring Pro Division event in Prince Albert, Saskatchewan, in mid-June.

With the two also teaming for an additional 90-point score, which tied for the third high-marked ride of the season, Lambert’s season trajectory was greatly impacted with his rivalry with Catch My Drift.

1. Daylon Swearingen rides Happy Camper for 91.5 points on Nov. 13 during the Championship Round of the 2021 PBR Canada National Finals in Edmonton, Alberta

The first event of the season featured the first 90-point ride of the year, but it was the championship round of the 2021 PBR Canada National Finals that bore witness to the top score of the season.

As the last out of the historic 2021 season, 2019 PBR Canada Champion Daylon Swearingen was in near picture-perfect form as he rode Happy Camper for a monstrous 91.5 points.

Not only did the trip secure Swearingen’s second victory at the PBR Canada National Finals, but it also cemented the 2021 Canadian Global PBR Canada Bull of the Year honor for Happy Camper.

Competing at just two events on Canadian soil in 2021, Swearingen, who went a perfect 5-for-5, finished the season No. 9 in the heated national standings.