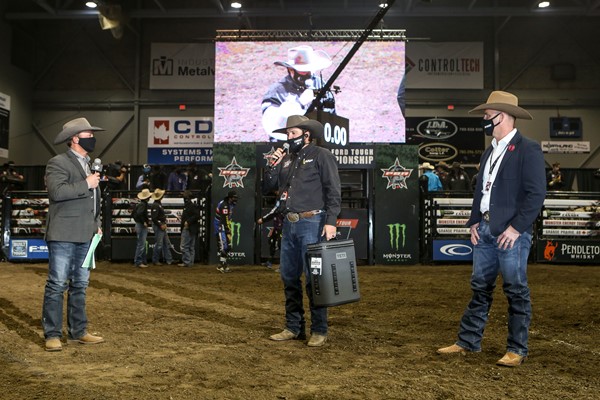 AIRDRIE, Alberta – The 2020 edition of the Glen Keeley Memorial PBR will go down in history.

Not just as the 2020 PBR Canada Event of the Year, but as one of the most memorable nights of bull riding in memory, courtesy of its relocation to the Keeley property, just West of Stavely, Alberta.

A memorial event, Justin Keeley, along with members of his family and a passionate board of directors, spearheaded the creation of the tour stop in honor of his brother and PBR standout Glen Keeley who pass away due to injuries sustained in competition in 2000.

After 17 years at Stavely Arena, where the event raised more than $300,000 for local scholarships and community building initiatives, the Glen Keeley Memorial is now “home.”

“It was my grandfathers, the Streeter’s ranch. That’s my great uncle,” Keeley began. “Back in the early years, in the 20s and 30s, this is where the Stavely Pro Rodeo started. We decided to have the bull riding this year, after a lot of conversations.

“The COVID restrictions were lifting and we could have a decent number of people for outdoor gatherings. We moved it to our ranch, that myself and Chelsea own out here. The L4L Ranch. We made the date a bit earlier too, we were concerned with the weather being an outdoor event.”

“It was a cool process too,” Keeley continued. “We got bucking chutes from Jim Thompson, Willow Creek is only 150 feet from the arena. It was just a really unique setup getting to that point. The event itself was second to none. The nice thing about this as a venue is that my brother Glen’s ashes are spread up on the hillside overlooking this spot. About three miles straight south from there. It was a pretty emotional day or two for sure. Me and everyone else on this committee, and the Keeley family, we are all pretty happy with this move.”

Situated a stone’s throw from the creek, the West-facing temporary arena build was picturesque to say the least.

A tradition at the Glen Keeley Memorial is to listen to an often updated video of Glen, his successes, but most importantly the stories from the guys he rode with. For Keeley, this year felt like the first year now that the event was home.

“Glen was what I think every bull rider at that level should be,” Keeley said. “He ate it, he breathed it. If Glen bucked off a 45-point bull, he wasn’t happy about. He was always there to win first. We are in a day and age where that isn’t always the big thing in sports. But this is a tough game these guys are in, and Glen was one guy that took it no matter what. It was what he did. He was a bull rider.”

“I will give it to a lot of these young guys riding now, they never knew Glen,” Keeley continued. “Some of them weren’t even born when Glen passed. But they have found out, and appreciate his will to compete, and that’s all we can ask.

“Talent runs up and down, styles run up and down. But we all know a guy that was born with not a ton of talent, but has that will to compete. That night, that’s all I can hope for these guys. One night a year I get to get away from my normal role in bull riding and produce an event in my brother’s name. That night it was just like it was home. The bull riding has come home. And this is where it is going to stay.”

Winning the Event of the Year, an honour the Touring Pro won previously in 2009-2010 and 2014, was a surprise for Keeley. Announced during the 2020 PBR Canada Finals in Grande Prairie, Alberta, Keeley accepted the award on behalf of the committee that backs him.

“In this area and in this business, it was a weird year. We couldn’t have the numbers we wanted, and we took some heat for even holding it. But we did right by the regulations. And we proved it could go there. We proved that the bull riders will come. So we will be building it there over the next couple years,” Keeley said.

“Tanner Byrne was at an event the night before and he came and watched. He brought the family and they camped there. After the video, he came up to me and said, ‘I have been to a lot of places, but I have never seen anything like this.’ I have been lucky to watch these guys come up. I marked Tanner at his first junior bull riding. Those are the reasons I love being involved. It’s not money or anything else, but the people.

“And I think that is what the event of the year should reflect, the people that matter and who are putting their asses on the line, driving to the literal middle of nowhere to get on a bull in my brother’s name. It’s so cool. It was a unique Canadian moment. I am a proud Canadian, and very proud of the world I have come from. But I think that was one of the coolest days. I am excited we won the Event of the Year award, for all these people who get behind it and put this thing on.”

In the end, eventual 2020 PBR Canada Champion Dakota Buttar won the event with a 90.5-point score on Wild Hoggs Bucking Bulls’ Tykro Pound Sand. Keeley, who judges with PBR Canada at select events, said that as a fan that day, he thinks the right guy won.

“The thing for me this year, being on our ranch was Chase, my son fighting bulls there. He has fought our event for some time. But being at home, and as a dad, it was really hard. It was cool, but hard to keep my composure half the night,” Keeley said.

“I stress a lot when you are judging. You are not there to be a fan. You put your scores on the card and that’s that. This year it was sweet. Rode some early on. You had Dakota who was hotter than hell all year. Then you had some guys, some dark horses that night. There are guys that have their swagger. But it didn’t matter that night what they ran in for Dakota, he was going to ride that bull.

“There are certain guys where you can tell 20 minutes before the event how they are going to do. I don’t get to be a fan and scream and cheer and holler very often. We didn’t get much bull riding up here this year, but that bull riding was as good as it gets. The right guy, on one of my cousin’s bulls, won the deal. That bull is 10 minutes from his back door.

“I don’t know there was a ranker trip where a bull got rode in Canada than that night.”