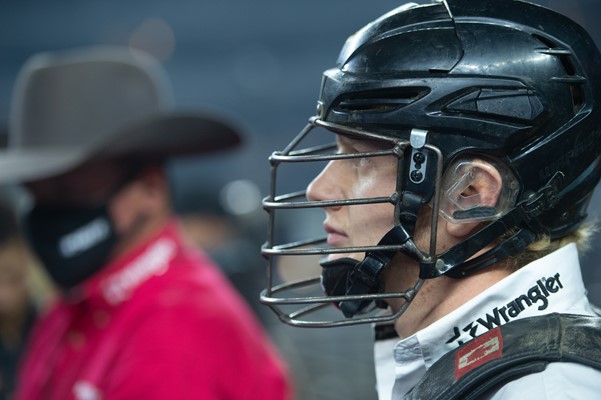 NEW YORK CITY – With the 2021 PBR season in full swing in the United States, four more Canadians have travelled across the border in search of world points and a berth to the elite Unleash The Beast – Brock Radford, Coy Robbins, and Bryce and Lonnie West.

A feat mounted by several other Canucks thus far this season, including the likes of Jake Gardner and Tanner Eno, one, Logan Biever, was able to capitalize on his successes on the Pendleton Whisky Velocity Tour to make his elite Unleash The Beast debut in mid-May in Billings, Montana.

RELATED: Unleash The Beast Preview – Biever to Debut in Billings

The quartet of new U.S.-bound riders will all make their 2021 season debuts at a duo of PBR Touring Pro Division events held this weekend in Montana. First riding in Kalispell for the Kalispell Automotive Group PBR on Friday, June 4, they will travel more than 200 miles east to ride at the Dusty Gliko Bull Riding Challenge in Great Falls on Saturday, June 5.

For Radford, success on the league’s developmental tours and a berth to the elite Unleash The Beast would be a return to familiar territory for the De Winton-native. After debuting on the premier series in Springfield, Missouri, in September 2017, Radford has competed sporadically on the sport’s top tour in the seasons since, including making two appearances at the World Finals.

After reaching the most prestigious event in bull riding for the first time in 2018, Radford returned to the PBR World Finals in 2020, finishing a career-best 19th.

To date, Radford’s best finish at a regular-season Unleash The Beast event was in February 2020 when he was ninth at the PBR Iron Cowboy Major in Los Angeles.

For his first draw of the 2021 season, Radford has drawn Chad Berger’s Short Stack in Round 1 of the Touring Pro Division event in Kalispell.

Lonnie West, like Radford, is also no stranger to elite Unleash The Beast action.  Reaching the elite tour for the first time in April 2018, competing in Billings, Montana, West concluded the season with his debut at the PBR World Finals.

While West rode on the sport’s top tour throughout 2019, he has not been back since September 2019.

Hoping to begin his season in momentous fashion, West will first face Twisted Mind in Round 1 of the Kalispell Automotive Group PBR.

Bryce has yet to reach the elite Unleash The Beast, however, he has past experience competing in the United States. Making the trip south of the border in 2018, West competed at two events, striking out at both, before returning home to Canada.

Eager to record his first 8-second effort of his career in American competition, Bryce will climb aboard Sun Dog in Round 1 of the Friday Touring Pro Division stop in Big Sky Country.

The contingent of Canadians making their season debut this weekend is completed by 2017 PBR Canada Rookie of the Year Robbins.

Also chasing his first-ever berth to the elite Unleash The Beast, Robbins rode at United States events in both 2018 and 2019. Only finding success once, Robbins finished 16th at the Velocity Tour event held in conjunction with the National Western Stock Show in Denver in 2018, covering Compact for 84.5 points.

Awaiting Robbins in Kalispell is another standout bovine from 10-time PBR Stock Contractor of the Year Berger, Bad Situation.

RELATED: Lawrence to Return from Offseason Shoulder Surgery this Weekend in Montana

“This is the longest I have sat out,” Lawrence told CBS Sports Network’s Kate Harrison last month in Billings, Montana. “It sucks. It seems like forever, but I have never been this healthy and this strong in my career, so it will be exciting to see what I can do.”

Slated to ride at both Montana Touring Pro Division events, Lawrence has drawn Get Shorty, while Swearingen will face Buttons in Round 1 in Kalispell.

Action for the back-to-back events in Montana begins with the Kalispell Automotive Group PBR in Kalispell at the Flathead County Fairgrounds starting at 7:00 p.m. MDT on Friday, June 4, followed by the Dusty Gliko Bull Riding Challenge in Great Falls at the Montana State Expo Park Grandstands at 6:00 p.m. MDT on Saturday, June 5.