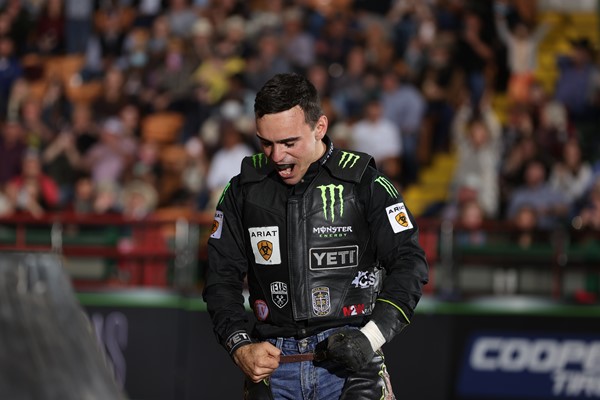 Did you miss Jose Vitor Leme? We know we did. The 2020 PBR World Champion was back in action in Fort Worth and teamed up with a familiar foe to make some 90-point magic. Plus, Chiseled led a bull pen that meant business and the world title race lost a contender to injury. Miss a moment of the action this weekend? Here’s what happened around the PBR.

The brand new dad dedicated that performance to his newborn son, Theodoro. (Go ahead, say “aww.” We know you want to.)

Though Leme was bucked off in Round 2, he rebounded in the championship round to ride Woopaa – the bull on which he clinched his world title – for a whopping 94.75 points, clinching his first event win of the season.

Woopaa wasn’t the only bull to show up in Fort Worth. Chiseled led the way among the bovines with a 47-point bull score, Smooth Operator carried Taylor Toves to a 92.75-point ride, and did you SEE that championship round?

It wasn’t all good news in Fort Worth, though, as Brennon Eldred will be out 4-6 weeks after breaking two ribs and sustaining a partially collapsed lung.

It may only be March, but it’s never too early to start planning for the 2021 PBR World Finals on Nov. 3-7! We’re heading back to Vegas, and tickets go on sale on March 3.

Hunter Ball won Round 1 at the Collision at the Coliseum in North Charleston, South Carolina …

…but it was Jesse Petri going 3-for-3 to earn the first event win of his PBR career.

Check out the best photos from night one and night two in Fort Worth.

You heard the man!

Blessing your day with some inspiration.

Now THAT is a face we’re always happy to see!