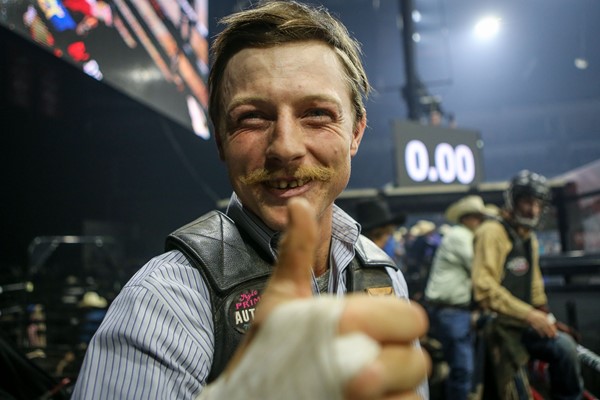 NEW YORK CITY – Last month, not only did the elite PBR Canada Cup Series return to competition, but the Touring Pro Division was hard at work. With lot’s to recap, we’ll get straight to it.

Today, we look back at the highlights from August as told by the month’s can’t-miss social moments!

Before we get into the action from August, can we all agree that Brock Radford’s travelling companion Louie is the cutest around?

GUESS WHO’S BACK …. BACK AGAIN

Zane Lambert proved why he’s a two-time Champion with this Round 1-winning ride.

… and then went on to win the event.

Fan-favorite Radford also cowboyed up in Lethbridge to tie with Lambert for the Round 1 win. Let’s go behind the chutes for that ride!

Aussie, Aussie, Aussie! Never before has an Australian won the PBR Canada Championship. But Callum Miller has plans to become the first in 2021.

If the Warwick, Queensland native keeps riding like the way he did at the Cup Series season-launch in Lethbridge, finishing second and winning the accompanying 5/5 Bucking Battle, Miller will be in content to make history at year’s end!

Lonnie West was excited for the Cup Series to get back to action, sharing this throwback from 2017.

Once inside ENMAX Centre, West got to work, going 2-for-3 to tie for fourth!

With all the action, Chad Hartman made sure to hit the practice pen to make sure he was fully tuned up for the run!

An impressive run at the August Touring Pro Division events led 2018 PBR Canada Rookie of the Year Nick Tetz to briefly hold the No. 1 ranking in the race for the 2021 PBR Canada Championship.

After a fourth and fifth-place result in Coronation, Tetz finished both first and second at the prestigious Glen Keeley Memorial PBR to capture the top position.

He event went for 90 on Al Capone!

Jared Parsonage notched his third event win of the year at the Celebration for the Two Bit Nation in Magrath. Here’s the 8-second effort that put him in the winner’s circle.

And if there was any doubt Parsonage is a cowboy through and through, check out his team roping skills on display just weeks after his win.

Get to know the name Griffin Smeltzer now, because this kid is going places!

Not long after he tied for fourth at the season-launch Cup Series event in Lethbridge, where he rode 2018 PBR Canada Bull of the Year Happy Camper for 90 points, he won his first event at the Cody Snyder Charity Bull Bustin’ in Calgary!

Tanner Eno reached an important milestone in front of a hometown crowd, victorious in Coronation.

PBR events wouldn’t be possible without the league’s fearless bullfighters! Checkout some of the best saves of the month by Tanner Byrne.

CHEERS TO THE HAPPY COUPLES …. AND THEIR ADORABLE CHILDREN

The Parsonage’s celebrated their first wedding anniversary, while the Byrne’s marked their seventh year of wedded bliss and the Finkbeiner’s their second!

… and while we are talking about the Byrne’s, is there anyone cuter than Layla as she headed off for kindergarten?

Wait, we take that back! She has some competition from Chelsea and Wacey Finkbeiner’s son Ledger Laine.