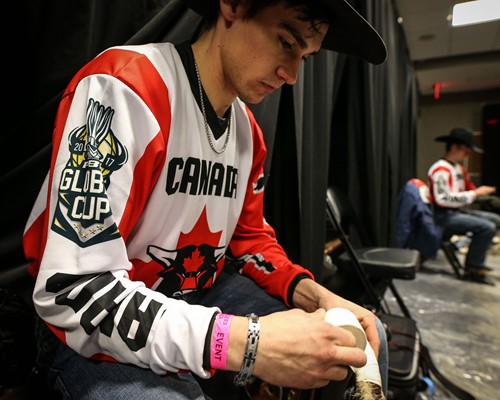 AIRDRIE, Alta. – In mid-November, Cody Coverchuk was riding high, newly minted the 2021 PBR Canada Champion. Not only did he make a come from behind surge to win the title, but he became just the third rider in history to win the year-end honor multiple times.

But his career moments didn’t stop there.

In late January, Coverchuk was tapped by Coach Tanner Byrne to represent Team Canada at the 2022 PBR Global Cup USA on March 5 in Arlington, Texas at AT&T Stadium.

Coverchuk got his first and only taste of Global Cup competition in 2017 at the inaugural edition of the event in Edmonton, Alberta. Representing the hard-fighting Maple Leaf, Coverchuk, however was unable to convert, going 0-for-2.

After a brief hiatus from the sport in 2019, Coverchuk says getting the call that he was selected to ride for Team Canada was one of the happiest moments of his career.

“With the struggles of the past couple years I didn’t think I would get that opportunity to represent Canada again,” Coverchuk said. “So I am just super excited to get down there and show what Canada can do.”

“It’s so big because you’re wearing the Maple Leaf. It’s not just about you. Every event we go to it’s an individual sport. We will have the country riding on your back for this one, and the other guys on the team. It will be extra pressure. But I like the pressure.”

While the Global Cup has always featured the team approach, in 2022, the PBR is making a monumental shift in the sport, launching the PBR Teams league.

Coverchuk says that bringing the sport forward like the PBR has for more than 25 years with innovation like this will only continue to bring bull riding to new heights.

“I like the format,” Coverchuk began. “We don’t usually get to do things like this. Going into the team part of the year, this all goes perfect for the PBR. I think it’s a lot easier to be fired up and be ready because it's more than just the four or five other teammates, but we will have Tanner there in our corner too, as well as the whole country.”

“I think the fan base is going to grow from what we are seeing the PBR do with the team format of the sport. We have been watching Sunday night football for a long time, I think we aren’t far off from Sunday night bull riding and have a matching fan base to support it pretty soon.”

The four men that will be joining Coverchuk in wearing the Canadian jersey are Jordan Hansen, Brock Radford, Jared Parsonage and Dakota Buttar, all of whom have competed multiple times at the PBR Global Cup.

For Coverchuk, he says that if the roster selection was up to him, he wouldn’t have filled it any different than Coach Byrne.

“I think Tanner really hit the nail on the head with the guys he chose. He couldn’t do a better job that way.”

“As far as a team I think this is going to be a good group,” Coverchuk added. “We all have a mutual respect for one another built on the fact that we all know we can ride rank bulls.”

“I am pretty excited, and I haven’t had the feeling yet of a Global Cup with a team like this. I am going to appreciate this one a lot more than the first one I think.”

The 2022 PBR Global Cup USA will feature two rounds of competition, where three riders from each team will attempt one bull. Throughout those rounds, every rider from each team must attempt a minimum of one bull. Following the initial rounds, each team will select one rider to attempt the nation’s final bull in the bonus round.

The 2022 PBR Global Cup USA Champion will be the team with the top combined score through their seven outs.

Team Canada has historically been an incredible one day team, but previously a two-day format has been the Achilles heel. The optimism among those on and around the team is high.

As for what sort of matchups can be expected, never to back down from a challenge, Coverchuk has his eyes on a World Champion.

“There is one in particular I want to get on. He is the reigning World Champ Woopaa. That bull is so cool, and I think he fits my style. We would go together perfectly, and for a big score.”

“If we get a chance to get on him it would be in a bonus round or something. So let’s get that first one rode and we can somehow get that bull as a team and Tanner picks me to get on him. That would be perfect.”