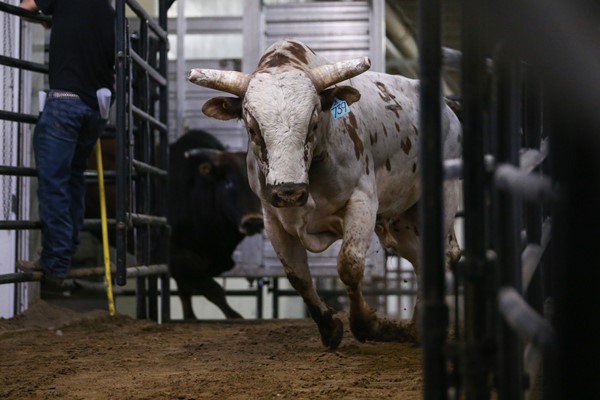 RETURING RANK ACTION TO REGINA – This weekend, for the first time in history, PBR Canada’s elite Cup Series, presented by Wrangler, will buck into Regina, Saskatchewan. The PBR Regina Classic, will be held at Brandt Centre on June 22 and is the first of two midweek events of the year. The 2022 PBR Regina Classic will be held in tandem with Canada’s Farm Show, scheduled for June 21-23. As one of the largest dryland farming shows in Canada, Canada’s Farm Show is one of the most important agricultural shows in North America that attracts a global audience. The tour stop is the third of the season, with the campaign for the elite Cup Series getting underway in Red Deer, Alberta on June 11, followed by last weekend’s event in Brandon, Manitoba, on June 18. The Regina event will begin Wednesday, June 22 at 7 p.m. CST.

THIS WEEKEND’S FORMAT – The PBR Regina Classic will feature two rounds of bull riding. Each rider will get on one bull in Round 1 on Wednesday. The 10 bull riders with the best scores will then advance to the championship round later that evening where they will attempt one final bull in an effort to be crowned the event champion. This weekend, one rider will have the chance to earn 80 national points.

SMITH GETS THE GOLD – Just one day after converting in his PBR Team Series debut during the preseason event in Bismarck, North Dakota, Blake Smith reached another key milestone. Compliments of a perfect 2-for-2 showing, Smith won his career-first PBR Canada Cup Series, presented by Wrangler, event, victorious at the PBR Mazergroup Chute Out. Following a five-hour drive from Bismarck, Smith readied to take on Confused Mind in Round 1 as a sold-out crowd watched on. In perfect time with the animal athlete, Smith reached the requisite 8 for 83.5 points, tying for the round win. Smith then used his early pick in the Round 2 bull draft to select Crossfire’s Black Jack, a decision which proved dividends. Matching the powerful animal athlete jump-for-jump, the electric crowd erupted in cheer as Smith reached the whistle for an event-best 87 points.

Edging past the runner-up contender by a mere 2 points in the aggregate, Smith’s score clinched him the victory. Smith’s golden finish earned him a critical 77 national points. Ranked No. 4 in the national standings prior to the event, Smith surged to No. 2 in the fierce battle to be crowned the 2022 PBR Canada Champion and earn the accompanying $50,000 bonus. Smith is now within a mere 11.5 points of No. 1 Lonnie West. Smith now leads PBR Canada in event wins (3), also earning the victory at the Touring Pro Division events in Lloydminster and Meadow Lake, Saskatchewan, and round wins (4) across all levels of competition. Smith earned two of the round wins last weekend when he tied for the top score in both rounds of competition for the PBR Mazergroup Chute Out. This week in Regina, Smith will look to overtake the No. 1 position in the national standings, first going head-to-head against Moe Joe.

WELCOME THE WORLD CHAMP – This weekend in Regina, Daylon Swearingen will compete for this first time in Canada since winning the 2022 PBR World Championship. Wasting no time in getting a jump start on the 2022 season, Swearingen’s first event in his gold buckle campaign was the 2021 PBR Canada National Finals, which he won via a perfect 4-for-4 showing. Swearingen’s determination was on full display throughout the year, but was highlighted at the conclusion of the regular season. After concluding the regular season No. 2 to Joao Ricardo Vieira by 32.34 points, Swearingen entered the expansion Pendleton Whisky Velocity Tour Finals. He finished third, collecting 41.33 points to leapfrog Vieira by a slim 8.99 points to begin his fourth career PBR World Finals as the No. 1 man in the world. Continuing his momentum, Swearingen was then locked in a ride-for-ride battle with Vieira and 2018 PBR World Champion Kaique Pacheco as the marathon PBR World Finals got underway. Inside Dickie’s Arena, Swearingen’s gutsy 6-for-8 showing at the event earned him the World Finals event title and his career-first PBR World Championship. Swearingen is now just the seventh rider to capture both honors in the same season, joining Leme (2021), Jess Lockwood (2019), Silvano Alves (2014), J.B. Mauney (2013), Renato Nunes (2010) and Mike Lee (2004). In the PBR’s 29-year history, Swearingen is the 20th different rider – and 12th American – to claim the PBR World Champion gold buckle. His title is the 16th time a rider from the United States has won what’s been called the most difficult individual championship in professional sports, and first for a New York native. Throughout 2022, Swearingen went an impressive 26-for-60, covering 43.33% of his animal athlete opponents. He earned $1,697,481.63, including $1,394,000 for his career-first PBR World Championship and World Finals event win. Swearingen is now 17th in all-time money earned in PBR competition with his career earnings topping more than $2.21 million. Since winning the PBR World Championship, Swearingen was drafted in Round 1 of the inaugural PBR Team Series Draft, presented by ZipRecruiter, and was the part of a blockbuster trade in the second round which inevitably sent him to the Carolina Cowboys. As the preseason got underway last weekend in Bismarck, North Dakota, Swearingen was integral in the Carolina Cowboys’ 2-0 finish in the games, and second overall finish in the event. In Regina, Swearingen will take on Two Bit Bucking Bulls’ Look At This Dude in Round 1.

WEST REMAINS NO. 1 – Lonnie West continued his resurgent season at the most recent PBR Canada Cup Series event in Brandon, Manitoba, going a perfect 2-for-2 to finish second and further his stronghold on the No. 1 rank in the Canadian standings. West was quick to strike in Round 1, delivering one of the event’s initial qualified rides when he covered Smog for 81.5 points. Remaining laser focused, West again converted in Round 2, dominating Trump Card for 87 points. West has now covered his last four bovine athlete opponents on home soil, also going 2-for-2 during his second-place effort at the season-launch Cup Series event in Red Deer, Alberta. Garnering 57.5 national points for his latest silver showing, West is now 11.5 points out front of No. 2 Smith. Eager to continue his momentum, West has drawn Flying Four Bucking Bulls’ Howlin’ Wolf in Round 1.

LAMBERT CRACKS TOP 10 – As one of the most decorated bull riders in PBR Canada history, last weekend, Zane Lambert inched one step closer to further cementing his name in the record books. Tying for fourth place alongside Jared Parsonage at the most recent Cup Series event in Brandon, Manitoba, Lambert netted 22.5 national points to crack the Top 10 in the race to be crowned the 2022 PBR Canada Champion. Already with two national titles to his name, should Lambert emerge supreme in 2022, he would tie three-time Champion Aaron Roy or winningest bull rider in Canadian history. In Brandon, as the event got underway, Lambert was upended by his Round 1 draw, brought down by Paulie Wallnutz in 4.69 seconds. Needing to rebound, Lambert was triumphant in Round 2, delivering an 84.5-point effort atop Freaked Out. Now No. 9 in the national standings, Lambert trails No. 1 West by 103 points. This week in Regina, Lambert will look to gain further ground when he first attempts Cash Me Outside in Round 1 of the PBR Regina Classic.

PAST REGINA EVENT WINNERS – The elite PBR Canada Cup Series, presented by Wrangler, was scheduled to travel to Regina in March 2020, however, the event was cancelled the day prior after the announcement of mass gathering restrictions due to the COVID-19 (coronavirus) pandemic. While the Cup Series has never before travelled to Regina, the Rocky Cup and Touring Pro Division visited the city three times prior. In 2006, Rocky McDonald won the Rocky Cup event in Regina, while the pair of Touring Pro Division events held in the Saskatchewan city in 2011 were won by Ty Patten and Aaron Roy.

BULL PEN – This weekend’s bull pen for the debut PBR Canada Cup Series, presented by Wrangler, event in Regina, Saskatchewan will be headlined by two-time and reigning PBR Canada Bull of the Year Happy Camper. After making his season debut in Red Deer, Alberta, in early June, Happy Camper was back to his winning ways at the most recent Cup Series event in Brandon, Manitoba. Earning his first YETI “Built for the Wild” Bull of the Event honor. Bucking in Round 2, Happy Camper was awarded an event-best 43.5-point score for his 7.64-second buckoff of 2020 PBR Canada Champion Dakota Buttar. Happy Camper will buck in the championship round of the PBR Regina Classic, alongside fellow Two Bit Bucker and 2020 PBR Canada Bull of the Year Catch My Drift, in addition to Hot Tamale and Langham Kid.

Saskatchewan will also have a presence in the bull pen, with Prince Albert’s Flying Four Bucking Bulls scheduled to bring eight bovine athletes. While Finning Lil Shorty and Finning Nikki Sixx will buck in the championship round, Finning JB Muley, Duke Ka Boom, Cash Me Outside, Howlin’ Wolf, Look Alive and Bobby Boucher will all be out in Round 1.

NEXT UP – The 2022 PBR Canada Sup Series, presented by Wrangler, will next travel to Kelowna, British Columbia, and Prospera Place for the second of two midweek events on Wednesday, July 20. Action for the PBR Okanagan Challenge will get underway at 7:00 p.m. PDT.

PROVIDING PROTECTION – The bullfighters on hand for this weekend’s event in Regina, Saskatchewan, are Tanner Byrne, Brett Monea and Ty Prescott.