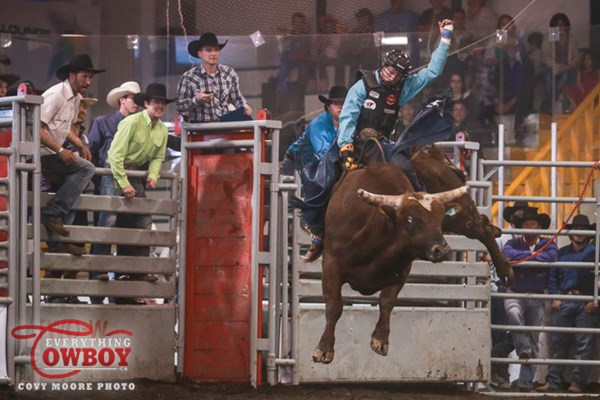 Shay Marks rides Hillbilly Heaven to a score of 84.5 to win the KNM Bull Bash PBR in Tofield, AB on April 16th, 2016. Photo by Covy Moore.

TOFIELD, Alberta -- Sunnybrook, Alberta's Shay Marks has already seen the bright lights of the PBR's Built Ford Tough Series. On Saturday night in Tofield, AB he got a step closer to making his return.

Marks put up an electric ride on Hillbilly Heaven from the Wild Hoggs, the same bull Zane Lambert won this event on in 2015. The score was 84.5 points and ended up as the eventual winner after no rides were made in the final round. Marks earned 60 points towards the PBR's World Standings putting him in 59th place to date.

Dakota Buttar was second both Friday and Saturday night earning 55 world points, he's now around 60th place in those world standings. Jake Wilson, Cody Casper and Will Purcell rounded out the top five in Tofield.

Next up on the 2016 PBR Canadian Tour are events in Prince Albert and Nipawin, SK on May 6th, 7th and 13th.

The following are the official results from the KNM Bull Bash PBR in Tofield, AB.