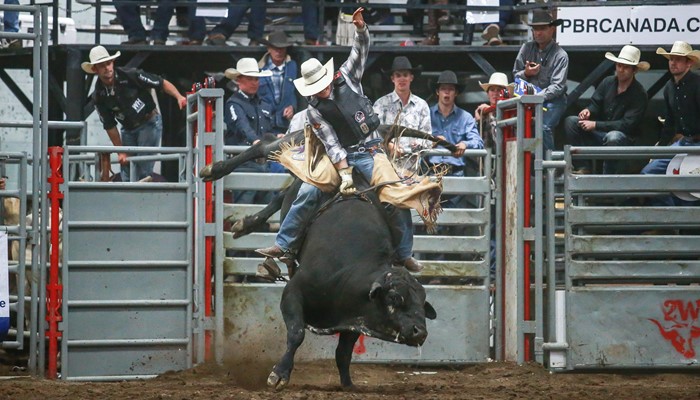 Mezei put together scores of 82 and 86.5 on the back of Sweet Dreams (Braithwaite Ranches) and Crooked Nose (Vold/Prescott) for the win and over $4,200 in earnings. For his efforts, the Carstairs, AB man put 60 world points in his account and about 200 Canadian points to move up into the top 20 in the Canadian standings. As the Glen Keeley Memorial PBR was the final Canadian Touring Pro Division event of 2016, not as many points were available to win as are available as the top tiered PBR Monster Energy Canada Tour.

Second, and fourth on the night went to Tisdale, SK's Justin Lloyd. Lloyd made good on a pick, with an 85.5 on Arnie from the Wild Hoggs bucking bulls in round one, that placing left him in the fourth placing overall. On his second entry, Lloyd nearly went the distance on Herf from the Two Bit Nation. That spot matched him up with the infamous Buck Wild of the Bailey Pro Rodeo firm out of North Dakota, bucking in Stavely under Two Bit Bucking Bulls.

In that match, the Saskatchewan talent kicked off the final round with a huge 89 point effort which would put him second behind Mezei for the buckle. Due to the scores not being matched up, second and fourth were the result instead of first and the buckle. However, the over $5,000 in earnings, 45 world points and a few hundred Canadian points boost him into the top ten in Canada heading into the final stretch of the season.

Third on the night went to Huntsville, TX's Douglas Duncan thanks to his 86.5 on Girletz Rodeo Stock's Big Fudge in round one. Currently 61st in the PBR's World Standings, Duncan actually was triple entered in round one going 2 for 3. Bucked off both his final round mounts, he would finish third and in a tie for sixth. For his work he earned 22.5 world points which move him to 57th on the planet.

Another Sasky bull rider, Tim Lipsett of Lumsden rounded out the top five thanks to an 84 in round one on Double Did (Vold/Prescott). Lipsett ranks inside the top ten in Canada heading into the remaining few PBR Monster Energy Canada Tour events of 2016.

Cooper's Comet from Vold Rodeo put up the top bull score of the night at 46 points to earn the Jensen Silver trophy buckle.

The following are the official results from the Glen Keeley Memorial PBR in Stavely, AB on September 3rd, 2016.