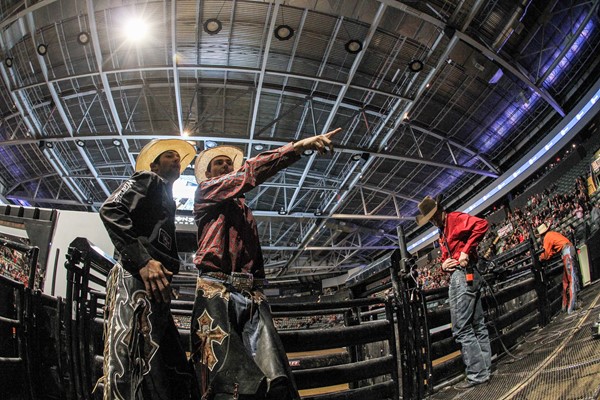 Pozzobon kicked off the round in section two with his 88.5 point effort on Modified Clyde (Dakota Rodeo - Chad Berger/Clay Struve/Ken Barnhard). That led the way up until the final two riders. World number two, Cooper Davis (Jasper, Texas) matched the score on Hammer Down (Triplett Bucking Bulls).

In the last out of the night, world number one Kaique Pacheco (Itatiba, Sao Paulo) bested the field with an 89 on Crazy Horse (Rocking I Rodeo Co) for the $30,000 check. J.B. Mauney (Statesville, North Carolina) was bucked off of Legacy (Hebert Bucking Bulls/2 K) and is now 800 points back of Pacheco for the number one spot, Davis is behind by 200.

Canada's hope at their first World Finals event title, Pozzobon, has now totalled 262.25 points on three bulls to lead the aggregate, with earnings of 410 World points and $39,000 to rank 24th in the World Standings.

Dakota Buttar (Kindersley, Saskatchewan) got his first score of the week at 70.5 points. Buttar landed right on his back and declined the reride option. Tanner Byrne (Prince Albert, Saskatchewan) went 3-for-6 at the 2015 PBR World Finals to finish in third place and win $105,000. This year he could still do the same but he would have to ride his next three, after another setback tonight on Moto Moto (J.A.R.S Bucking Bulls / Gene Owen), he's now 0-for-3.

Minion Stuart (Skori Bucking Bulls) was rode for 87.5 points by Marco Eguchi as a re-ride and Torch (J.A.R.S Bucking Bulls / Gene Owen) for the same score by fellow Brazilian Wallace Vieira de Oliveira. The two split fourth in Round 3 for $7,500. VJV Nailed (Vold Rodeo) put up 43.75 points bucking off Mike Lee in 4.72 seconds.

Round four of the PBR World Finals at the T-Mobile Arena starts at 6:15pm on Saturday November 4th, 2016. For more and to watch live online, visit PBR.com