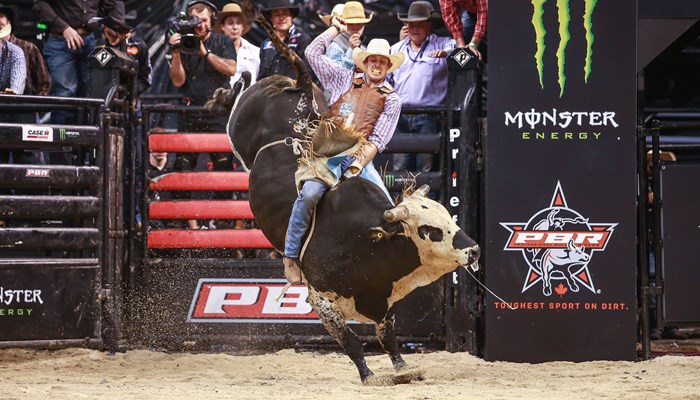 WINNIPEG, Manitoba -- Matt Werries of Jacksonville, IL earned the victory at stop number three of the PBR Monster Energy Canada Tour on Saturday night at the MTS Centre in Winnipeg.

Werries, 33, put together scores of 81 on Stick It (R-Saga Ranch) and 86.5 on Finning De Ja Voo Doo (Flying Four Bucking Bulls) as the only man to go two-for-two on the evening. For his efforts, Werries earned $6,263 and 80 world points. Two months ago, Werries won a BlueDef tour event in Guymon, OK. Currently he sits 52nd in the PBR World Standings. VJV Nailed prevailed in the Monster Energy Champion's Challenge putting up a bull score of 45 points, increasing the bounty to $15,000 in Calgary next week.

PBR Canada leader Ty Pozzobon of Merritt, BC was bucked off in round one but came back in the final round with a score of 86 points on Kingpin from the Wild Hoggs. Number two coming in, Dakota Buttar (Kindersley, SK) was bucked off in round one but didn't get a call back for the finals. Meadow Lake, Saskatchewan's Cody Coverchuk tied Gatlin Aebischer for third in Winnipeg thanks to an 85 that won round one on Stay Smart from the Wild Hoggs.

Pozzobon's 50 world points moved him up to 38th in the PBR World Standings while Coverchuk's 25 puts him 45th on the planet. For their work, Pozzobon and Coverchuk earned $4,638 and $2,677 respectively. Stay tuned for the full PBR Canada National Standings come Monday.

Rounding out the top six in Winnipeg were Garrett Green (Meeting Creek, SK) in fifth and DeWinton, Alberta's Brock Radford in sixth.

After this third stop in Winnipeg, the tour continues to Calgary, AB's Agrium Western Events Centre on Saturday September 24th; Abbotsford, BC on October 1st and Saskatoon, SK on October 14th and 15th. All roads will then lead to Edmonton as PBR will bring the PBR Monster Energy Canada Tour Finals and a special global invitational PBR event to Edmonton for a three-day global professional bull riding event scheduled for November 10-12, 2017.

Official results from the PBR Monster Energy Canada Tour stop in Winnipeg, MB at the MTS Centre on September 17th, 2016.