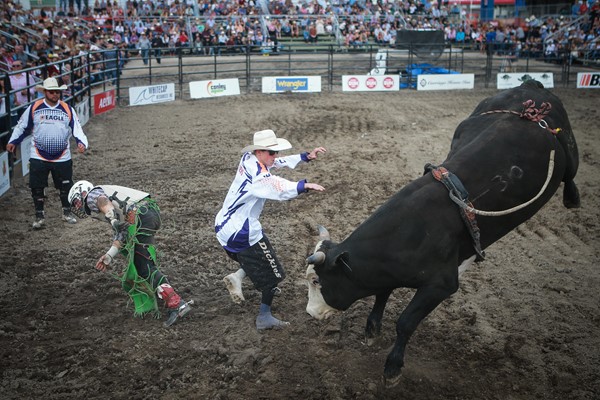 Nobbs rode Black Sugar (X6 Ranch/Lindsey Carlier) in Round 1 for 85, a score that wouldn’t be surpassed the rest of the night.

Finishing fourth, and the highest placing Canadian, was Justin Lloyd (Tisdale, Saskatchewan).  The 29-year-old rode Cracked Up (Vold Rodeo / Prescott) for 78.5 points in Round 1. For the finish Lloyd earned $1,183.27 CAD, 15 world points and 95 Canadian points.

For Lloyd the finish comes one week after winning the Monster Energy Tour’s stop in Toronto. Lloyd now sits No.4 in the Canadian National Standings, 420.83 points back from No.1 Jordan Hansen (Okotoks, Alberta).  He also continues to close the gap between himself and a berth on the elite Built Ford Tough Series, now tied with Kurt Shephard for No.43, just 82.5 points back from No.35 Reese Cates (Monticello, Arkansas).

There were no qualified rides in the championship round.

PBR Canada’s Touring Pro Division is back in action July 4-5 at 7:00pm at Ranchman's Renegades Charity Bullbustin in Calgary, Alberta. Be sure to stay tuned to PBRCanada.com and follow the tour on Facebook (PBR Canada), Twitter (@PBRCanada), and Instagram (@PBRCanada) for the latest results.

Championship Round: no qualified rides.