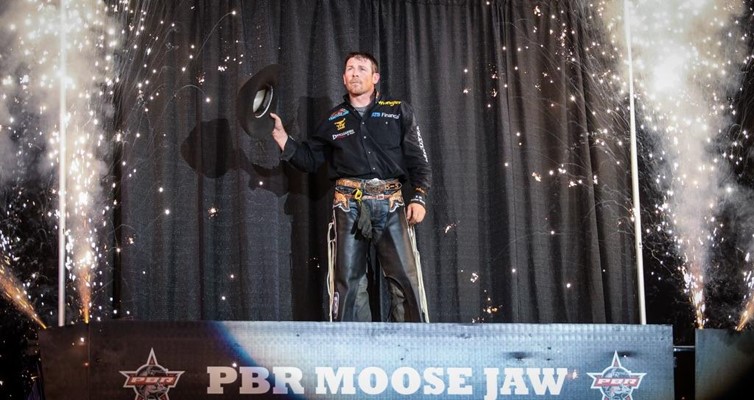 MOOSE JAW, Saskatchewan – Scott Schiffner wanted a little payback with Pound The Alarm, an athletic red and white paint bull that has a great history.

Schiffner got it Friday night with an 86.5-point ride to win the Professional Bull Riders Moose Jaw Powered by Young’s Equipment at Mosaic Place in Moose Jaw.

“That bull’s been to the PBR World Finals,” said Schiffner, 37, of Strathmore, Alberta. “He was raised here, then went down to the (United) States. I got on him before he went down to the states, and he bucked me off back when he was pretty young.

Yes, it is. The high marking put him in the No. 1 position heading into the final night of the two-day competition. But like many of the bull riders in the mix, he paid two entry fees and will rode again Saturday.

“If everything goes well, I have a chance to win first and second,” said Schiffner, a two-time Canadian bull riding champion and a PBR Canada champion, on Friday night. “The nice thing about this event is that I have a chance to do that.”

His first appearance on Pound the Alarm came four years ago, when the young bull bucked off the 16-time Canadian Finals Rodeo qualifier. On Friday, though, the Mosaic Place crowd saw the redemption ride for a proud Canadian champion.

“It was an excellent crowd,” he said. “They were energetic and into it. They understand the Western way of life and rodeo, so it’s entertaining for us to be able to perform in front of a crowd like that.”

For full results, visit the results and stats section of PBRCanada.com