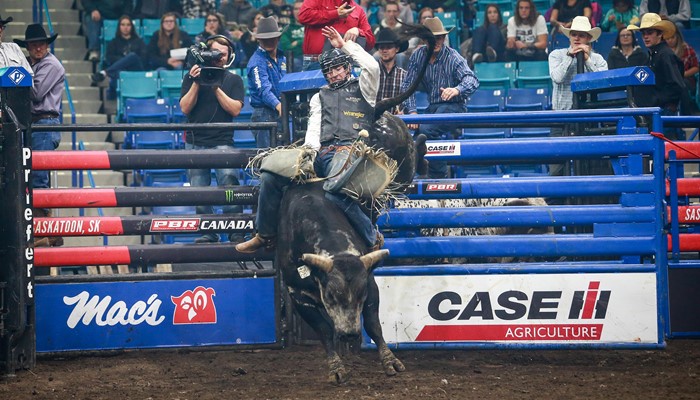 SASKATOON, Saskatchewan – For the eighth consecutive year, the PBR (Professional Bull Riders) will return to Saskatoon, Saskatchewan and the SaskTel Centre for the PBR Canada Finals, where the tour’s top rider will be crowned, earning the opportunity to compete for a spot at the prestigious PBR World Finals in Las Vegas, Nevada.

Season long riders have the opportunity to compete at more than 30 Monster Energy Tour and Touring Pro Division (TPD) events across Canada to earn points towards the Canadian National Standings, all in an effort to be the No.1-ranked man at year’s end and crowned the PBR Canada Champion.

In addition to winning the coveted champion’s buckle, the PBR Canada Champion will also earn a berth to compete at the Real Time Pain Relief Velocity Tour Finals in Las Vegas, Nevada on Oct. 28-30. The three-day event serves as the final opportunity for riders to qualify for a spot at the prestigious Built Ford Tough World Finals on Nov. 1-5, where the world’s top bull rider will be crowned, earning the prestigious gold buckle and $1 million bonus.

At the SaskTel Centre, riders will also be competing for the event title, crucial points towards the world standings and $20,000 available in prize money.

In 2016, Ty Pozzobon was named the PBR Canada Champion after logging four event wins and 15 Top 5 finishes, earning more than $58,000 at both Monster Energy Tour and TPD events.

Among the past champions, Lambert won the 2016 PBR Canada Finals event title, using an 83.5-point ride aboard Blue Stone and 85.5-point trip on Shot of Whiskey to claim the buckle. The finish propelled him within the Top 10 of the Canadian National Standings for the eleventh consecutive year.

The PBR Canada Finals is the seventh and final event of the 2017 Monster Energy Tour, the nation’s first-ever cross-nation, nationally televised PBR series.

The bull riding action begins at 7:30 p.m. CT on both Friday, Oct. 20 and Saturday, Oct. 21. All bull riders will get on one bull each in Round 1 on Friday night and Round 2 on Saturday night. The Top 10 will then advance to the championship round where the PBR Canada Champion and event winner will be named.

The Corral Party, which will be offered for the second year, is for avid bull riding fans who want a behind-the-scenes look at Canada’s premier bull riding circuit. This ticket add-on provides the VIP experience of a lifetime, including early entry; 60-minute backstage tour by a PBR host, featuring a PBR 101 presentation and a visit with some of the sport’s fiercest bulls; and the opportunity for photos and autographs from top PBR stars.

The PBR Canada Corral Party add-on can be purchased in addition to any ticket for the event’s second day on Saturday, October 21 for $25.