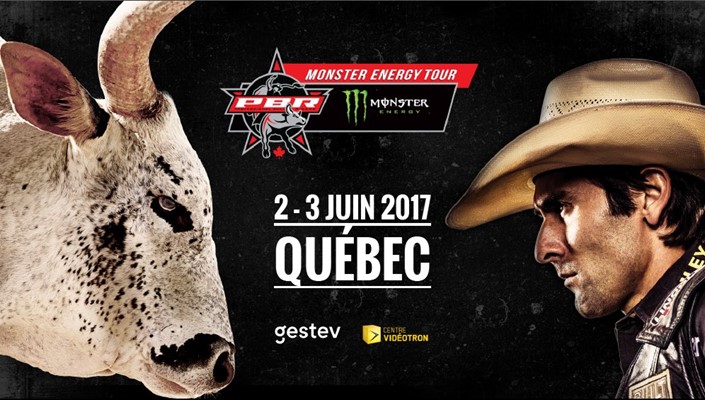 QUÉBEC CITY, Quebec (March 20) — PBR (Professional Bull Riders) has announced the PBR Monster Energy Tour – a new, national bull riding series visiting six Canadian provinces, will open the 2017 season in Québec City at the Vidéotron Center on June 2 and 3, 2017. Following these two hours of confrontation between the cowboys and the bulls, a country rock show will be presented for fans who want to continue their evening. More details to come about this festive event.

While PBR has hosted events in Canada since 1996, the new tour hits the road for its second season as a unified competitive series traveling across the country.  After beginning in Québec City, the national series moves on to visit Ottawa on June 9; Toronto, June 24; Calgary, September 23; Winnipeg, October 6; Abbotsford, October 14; and Saskatoon, October 20 and 21, where a PBR Canadian champion will be crowned.

“Québec is a top destination for international sports and a hotbed for action sports,” said Sean Gleason, CEO, PBR. “As PBR continues to grow on a global scale, we will continue to invest in expanding the PBR Monster Energy Tour in Canada. We’re thrilled to start the season in Québec in a beautiful venue hosting a two-day event that will include the top bull riders in the world.”

"We are proud to be partner with the best and have the opportunity to add the Gestev touch," said Patrice Drouin, president of Gestev. Our long-term wish is to create a new atmosphere in Québec City that will bring out the culture that surrounds this lifestyle that is a real extreme sport! "

“As PBR commits to bringing world-class events to Canadian fans, we are grateful for the support of Monster Energy, Gestev and Vidéotron Centre in launching this Event Major to open our 2017 national tour,” said Chris Bell, General Manager, PBR Canada. “The leading-edge marketing and promotion of our valued partners will generate strong awareness for the tour’s season and provide fans with a great experience.”