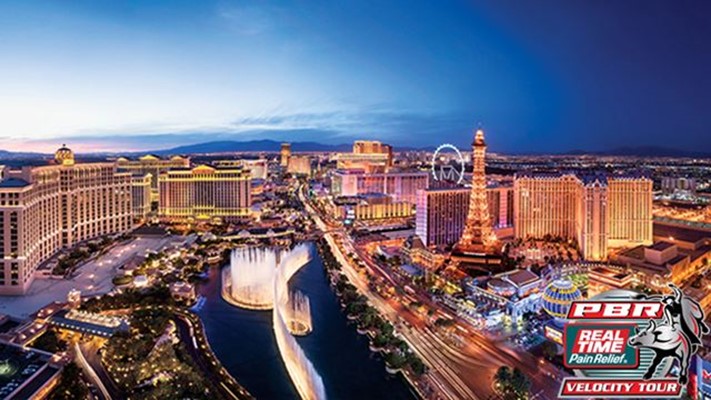 Tanner Byrne and Zane Lambert ride at the Velocity Tour Finals this weekend in Las Vegas.

To access the Velocity Tour Finals and PBR Global Cup digital broadcasts, fans are encouraged to download the free PBR app (for iOS and Android) or visit PBR.com during the event days.

“The production quality of these events demonstrates PBR’s commitment to providing a world-class digital experience to give fans the best live access to must-see PBR events,” said Sean Gleason, CEO, PBR. “If fans can’t make it to Las Vegas and Edmonton, this is the next best way to experience some of the biggest and most meaningful bull riding events in the history of the PBR.”

Amid one of the tightest points battles in PBR history, the Velocity Tour Finals is expected to crackle with playoff intensity – and huge implications for the world title race.

For 2015 PBR Canada Champion Byrne, the Velocity Tour Finals will mark his first event back from injury, sidelined since August with fractures in both his wrist and ankle.

The multi-day, multi-round tournament will feature an epic battle between PBR World No. 1 Derek Kolbaba and PRCA reigning champion and current No. 1 Sage Kimzey.  Five of the Top-10 riders in the PBR world standings will also compete, including No. 5 Jess Lockwood, No. 8 Joao Ricardo Vieira and No. 9 riders Fabiano Vieira and Dener Barbosa.

At the Velocity Finals one rider can earn 520 points toward the PBR world standings prior to the World Finals. With the Top 5 cowboys in the world separated by only 655 points, the pressure will be intense to deliver high-scoring rides.

Half of the Top 50-ranked professional bull riders in the world will compete at the Velocity Finals, which can qualify up to five athletes for the prestigious PBR World Finals (Nov. 1-5 at T-Mobile Arena in Las Vegas). Real Time Pain Relief Velocity Tour Finals Qualifiers: