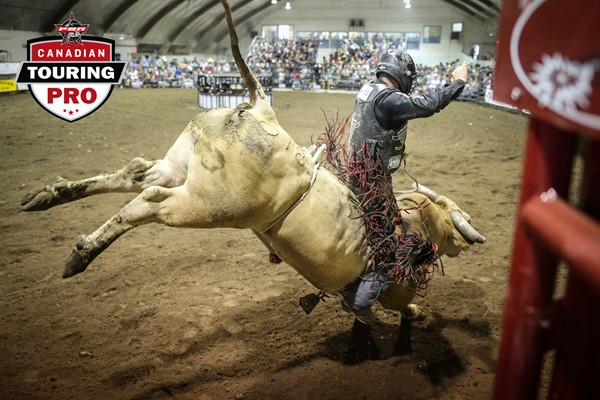 Brock Radford rides Nugget for 84.5 points to win Round 1 of the Coronation Royal Rumbull PBR. Photo by Covy Moore.

As the only rider to go a perfect 2-for-2 at Coronation Memorial Arena, the home province rider’s night began with a sixth place effort in Round 1, riding Outlaw Buckers’ Bobby McGee for 82 points.

In the short go Radford delivered an 88-point ride aboard Big Shot (Skori Bucking Bulls), to win both the round and event.

Complimenting his victory, the 22-year-old also finished second after double-entering.

While he didn’t earn a qualified ride in the short go, bucking off Tykro Checkered Flag (Wild Hoggs), the high-marked bull of the event, Radford’s Round 1 winning, 84.5-point trip aboard Nugget (Outlaw Buckers) propelled him to the event sweep.

Radford’s winning streak began in July when he won in North Battleford, Saskatchewan, which he followed less than a week later with victories at the Okanagan PBR Challenge and 19th Annual Elnora Brahma Rama.

The surging young gun’s most recent win further cemented his lead atop the PBR Canada standings, expanding his lead over No.2 Cody Coverchuk (Meadow Lake, Saskatchewan) to 706.66 points.

In the world standings, Radford rose seven spots, now ranked No. 35, the cut off for a berth onto the elite Built Ford Tough Series (BFTS).

He now leads No. 36 Kurt Shephard (Atherton, Queensland, Australia), who he split the second place finish with in Coronation, by fewer than 5 points.

Shephard’s runner-up effort, which earned him $2,169.43 and 25 world points, was fueled by his 84.5-point ride on Tweedle Dee (Vold/Prescott) in the championship round.

The Australian now travels to Nashville, Tennessee to compete at the final PBR BFTS Major event of the year, the Built Ford Tough Music City Knockout, presented by Cooper Tires, where riders will be vying for both an increased payout and points.

After finishing No. 32 at the end of 2016, Blanco began his season riding on the BFTS. However, he was cut from the tour following April’s Tacoma Invitational, fighting ever-since to regain his ranking, which included a summer stint riding in PBR Australia events where he logged two Top-10 finishes.

With the world points he earned in Canada, the Brazilian now ranks No. 37, trailing Radford and a berth onto the elite BFTS by approximately 22 points.