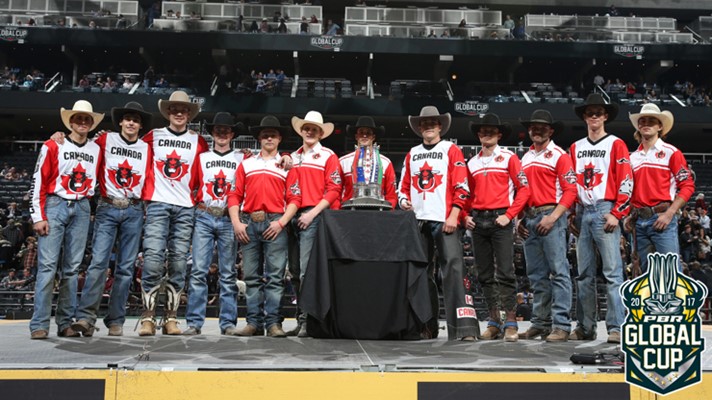 EDMONTON, Alberta – On the opening night of the inaugural PBR (Professional Bull Riders) Global Cup, presented by Encor by EPCOR, Team Canada defended its home soil inside Rogers Place with six qualified rides to surge to the top of the leaderboard.

The American roster was led by Derek Kolbaba (Walla Walla, Washington) and Stormy Wing (Dalhart, Texas). Both earned round wins as the victors in Round 1 and Bonus Round, respectively.

Wing once again made the eight aboard Red Bandana (Dakota Rodeo/Chad Berger/Clay Struve/Staci Wilks/N Bar Ranch/Chase Bass) after having covered the bull for 90.25 points to win Round 5 of the 2017 Built Ford Tough World Finals just five days earlier.

The duo’s north-of-the-border showdown once again brought a round win to the Texan. This time after they combined for a score of 88.25 points, propelling Wing to the top of the Bonus Round.

Richardson and Wing were the only two riders to cover both of their bulls on the first night of the two-day, Edmonton Global Cup event.

Preventing the team from being shut-out, Edgar Durazo (Moctezuma, Mexico) made 8 seconds during Mexico’s final out of the night, covering South Texas Gangster (Chad Berger/Julie Rosen/Clay Struve/Silent Seven) for 86.75 points in the Bonus Round.

Each rider from the five nations will once again get on one bull each, followed by the Bonus Round where the team’s coach will select two riders who will attempt the nation’s final two draws of the Global Cup.

At the conclusion of the event, the nation with the highest score in the aggregate from their Top 14 qualified rides will be crowned the victors of the Edmonton Global Cup earning international bull riding bragging rights, $400,000, and the Canadian horn from the Global Cup trophy filled with native soil.

TSN-3 will broadcast Saturday’s action LIVE starting at 8 p.m. MT, while fans around the globe can tune in for all the action live on the free PBR app and PBR.com beginning at 8 p.m. MT.