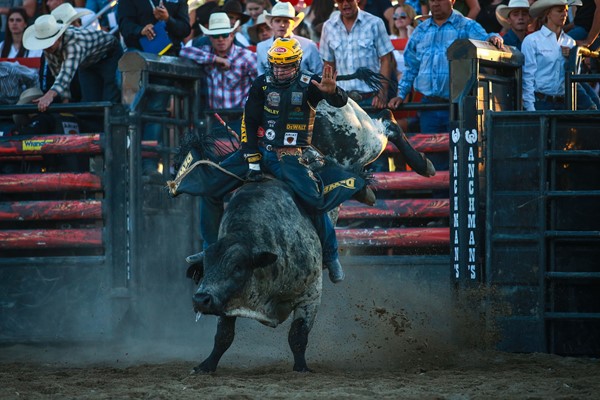 Triplett rode Anika's Pet for 85 points in the championship round. PBR Canada photo by Covy Moore.

Triplett began the night with a fifth place finish in Round 1 after riding Grandpa's Whiskey (Girletz Rodeo Stock) for 81.5 points. The 26-year-old then logged 85 points aboard Anika's Pet (Big Chief Bucking Bulls) in the short go, winning the championship round and solidifying his place atop the leaderboard as the only perfect rider that night.

Currently ranked No.8 in the world standings, Triplett could earn 60 world points on Wednesday night when the first two days of Bullbustin' conclude at Ranchman's, pushing him past current No.7 Stormy Wing in the rankings.

Second after Tuesday night's competition is Gustavo Pedrero (Jalisco, Mexico). Pedrero scored 86.5 points on Chip Shot (Outlaw Buckers) to win Round 1, but bucked off Spin Box (Outlaw Buckers) in the Championship Round.

Tennessee Whiskey (Outlaw Buckers) logged the top bull score of the night after earning 43.5 points for dispatching Tyler Harr in the championship round.

The second and final day of action for the Ranchman's Renegades Charity Bullbustin' begins at 7:00pm MST on July 5th where $30,000 will be paid out.

PBR Canada’s TPD will then host the Bullbustin' in Support of the Sheldon Kennedy Child Advocacy Centre on Thursday, July 6 at Ranchman's Cookhouse and Dancehall Inc. featuring $20,000 in prize money.