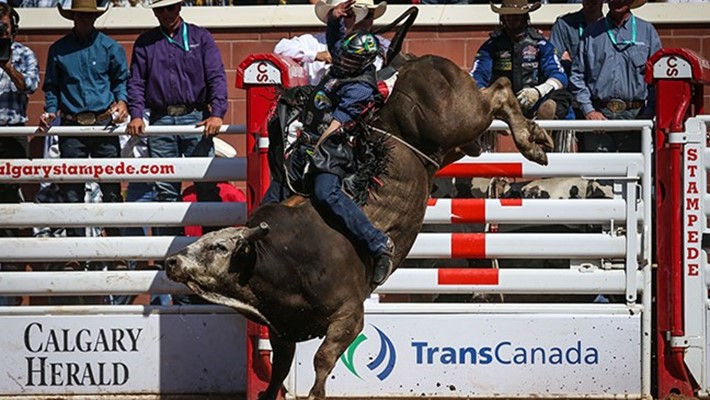 Ramon de Lima is amidst a career year in the PBR, and the No. 3 rider in the PBR world standings may be able to make history this weekend at the Calgary Stampede.

Lima won the third day of competition of Pool B with an 88.5-point ride on BAMF Thursday afternoon.

The ride earned Lima $5,500 and pushed Lima into third place in the Pool B standings with $7,000 ahead of Friday’s pool finale.

Lima is attempting to become the first Brazilian bull rider to win the Calgary Stampede since three-time PBR World Champion Adriano Moraes accomplished the feat in 1994.

The win pushed Lima into the world No. 1 ranking for the first time in his career, a position Lima would hold for seven weeks.

The 27-year-old is 2-for-3 in Calgary so far after previously riding Dense Fog for 74 points on Tuesday.

Fellow Brazilian Fabiano Vieira has already advanced to Showdown Sunday out of Pool A, and he could also make history this weekend.

Kimzey rode Magic Shivers for 81 points and a fourth-place finish Thursday to remain a perfect 3-for-3 this week. The 23-year-old leads Pool B with $8,500.

Cody Nance was the only other rider to reach 8 seconds on Thursday, covering Lil Shorty for 87.5 points and a second-place finish. The No. 4 man in the PBR world standings was able to move into the crucial No. 4 spot in the Pool B standings with $6,000.

However, only $2,500 separates Nance from first place Kimzey and eighth-place Jared Parsonage.

Reigning World Champion Jess Lockwood is $1,500 behind the Top 4, and Derek Kolbaba and 2017 PBR Canada Champion Zane Lambert sit only $500 behind.