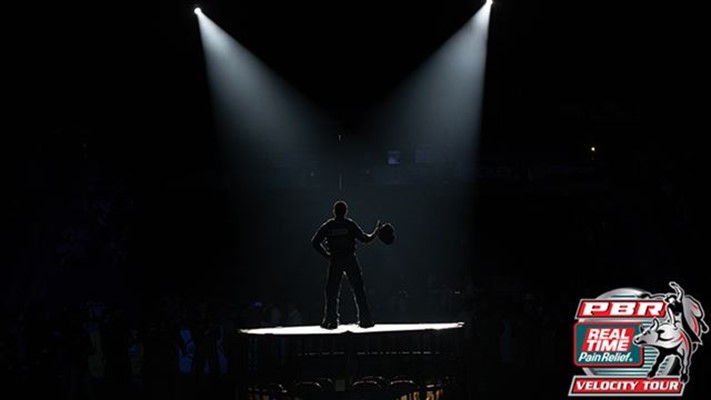 Brock Radford will compete at the RVT Finals via the Canadian invite, while Travis Maguire will compete as the 2018 INFR Tour Champion.

LAS VEGAS– For the third consecutive year, the PBR (Professional Bull Riders) Real Time Pain Relief Velocity Tour (RVT) Finals will return to the South Point Hotel & Casino. The event on Nov. 2-3 will showcase the top emerging talent in bull riding, competing alongside seasoned veterans, all attempting the rankest bovine athletes in the business in the chase for the Velocity Tour Championship and five coveted berths to the 25th PBR: Unleash The Beast World Finals.

Among the 45 riders set to compete at the two-day event are Canadians Brock Radford of De Winton, Alberta and Travis Maguire of Siksika Nation, Alberta.

Radford earned an invite to the event as the top-ranked Canadian in the national standings after Cody Coverchuk declined in order to ride at the Canadian Finals Rodeo. As Radford seeks his first-ever appearance at the PBR World Finals, he travels to Las Vegas ranked No. 38 in the world, 52.5 points behind the Top 35.

As the Canadian invite, Radford will have two opportunities to qualify for the 2018 PBR World Finals either as the top finishing international invite at the RVT Finals, or by riding his way into the Top 35.

For Maguire, he earned his ticket to the event as the 2018 INFR (Indian National Finals Rodeo) Tour Champion. The RVT Finals will mark Maguire’s first PBR event on U.S. soil after riding at just three Canadian events thus far in 2018.

For three-time World Champion Alves and two-time World Champion Mauney, the points available at the event are crucial. Both PBR legends find themselves in unfamiliar territory, currently ranked No. 30 and No. 32, respectively. Alves leads No. 36 Cody Jesus by 163.32 points, while Mauney is just 124.16 points ahead of the cutline for the 2018 PBR World Finals.

In a parallel to Alves and Mauney, Outlaw and Gay both find themselves in need of crucial points to qualify for the World Finals. While Gay is currently ranked No. 33, 62.5 points ahead of the cutline, Outlaw, who has made a remarkable comeback following a severe facial injury, is ranked No. 35, just 37.5 points in front of No. 36 Jesus, also competing at the Sin City event.

Other notable riders competing at Velocity Tour Finals, who find themselves on the World Finals bubble are:

No. 40 Rubens Barbosa currently ranked No. 7 in the RVT standings, 60 points removed from the No. 1 ranking, and 143.34 points outside of the Top 35 in the broader world standings.

The roster of riders competing at the RVT Finals – also known as “the championship before the championship” – will once again feature top-ranked invites from the PBR’s four international series in Australia, Brazil, Canada and Mexico, as well as the Touring Pro Division (TPD), INFR (International Finals Rodeo), NHSRA (National High School Rodeo Association) and CNFR (College National Finals Rodeo).

From the international divisions, Australia’s Cliff Richardson, Canada’s Radford and Mexico’s Francisco Garcia Torres will all be seeking their first World Finals appearance, while Brazil’s Fernando Henrique Novais (2014) will be attempting to ride at the most prestigious event in bull riding for the second time in his career.

Specifically for the international invites competing, the top-finishing contender will earn an automatic berth to the World Finals. Last season that rider was Jose Vitor Leme who wowed the crowds inside T-Mobile Arena by going 6-for-6 to be crowned the 2017 Rookie of the Year and World Finals Event Winner. The season prior, in 2016, now world No. 12 Dener Barbosa earned the international invite slot. Both Brazilian standouts will return to the RVT Finals this season to compete again.

Also earning invites to the event are 2018 National High School Finals Rodeo Champion Cole Skender, 2018 CNFR Champion Will Centoni and 2018 INFR Tour Champion Maguire, all of whom will be making their first appearance at the event. They will be joined by the No. 1 ranked rider from the TPD Andrew Alvidrez.

In the razor-tight race to be crowned the 2018 Velocity Tour Champion, the Top 5 ranked riders are separated by fewer than 50 points, while the Top 15 are all within 105 points of the top spot, with all set to ride at South Point Hotel & Casino except No. 8 Brady Oleson.

The field is led by No. 1 Michael Lane who has been dominant on the Velocity Tour this season, recording an event win (Dayton, Ohio), six Top-5 and eight Top-10 finishes. He is followed closely by Colten Jesse and Mason Taylor who are 40 points behind the top ranking. The tour’s Top 5 is rounded out by No. 4 Paulo Ferreira Lima and No. 5 Justin Granger who trail Lane by 44.17 and 50 points, respectively.

Each rider will attempt one bull per night Friday and Saturday. Scores from the rides will then be combined, and the Top 10 riders will advance to the championship round following the completion of Round 2 on Saturday, Nov. 3.

The 2018 Velocity Tour Champion and Velocity Tour Finals event winner, along with the runner-up in the standings and at the event, will all qualify for the 2018 PBR World Finals. Additionally, the top finishing international invite will all also qualify to compete at the event from Nov. 7-11 at T-Mobile Arena.

The qualifiers for this year’s RVT Finals at the South Point Arena are:

PBR also revealed the RVT Finals bullfighters. The fearless men on the dirt slated to protect the bull riders during each 8-second ride or wreck at the RVT Finals are Cody Webster, Nate Jestes and Cooper Waln.

The action-packed weekend at South Point will include both ABBI Derby and Classic bulls. The bull pen consists of 45 ABBI Derby bulls – all 3-year-olds – and 45 ABBI Classic competitors. The Derby bulls are athletes just beginning their careers with a bull rider on their backs. This is the first step taken with these bucking bulls to get them ready to perform at future PBR events.

The Classic competition is the ABBI’s Wild Card event, which is a last-ditch effort for bulls who aren’t already qualified for the Classic World Finals. These are 3- and 4-year-old bulls who weren’t quite ready to compete earlier in the year, so they haven’t been to many events. Up to five of these bulls in this competition can win their way into the Classic Finals first round and appear in Round 1 of the PBR World Finals on Wednesday.

For more information on the RVT Finals Nov. 2-3 at the South Point Hotel & Casino or the 25th PBR: Unleash The Beast World Finals Nov. 7-11 at T-Mobile Arena, please visit www.pbrworldfinals.com.