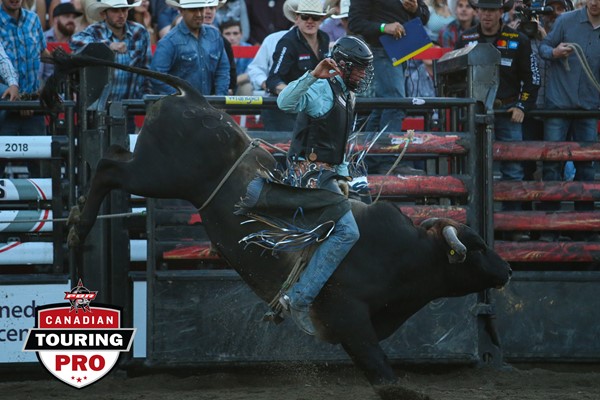 Jared Parsonage rides Memphis, his fifth bull of the night to win Day 3 at the Ranchman's PBR BullBustin'. Photo by Covy Moore / CovyMoore.com

Through private donations, the 50/50 and event Calcutta, more than $50,000 was raised in support of the Sheldon Kennedy Child Advocacy Centre.

Parsonage rode Overcooked (Vold Rodeo) in Round 1 for 81.5 points and after three re-rides in the Championship Round, faced Memphis (Outlaw Buckers Rodeo Corp.) to register a score of 83 points for the event win.

For his five-bull night, the long-tall Saskatchewan man earned $4,284.00 CAD, 60 world and 230 Canadian points. In the Canadian standings, his earnings elevate him to the No. 5 spot in the PBR Canada National Standings, while world points propel him within the Top 65 in the world.

After an event win and a fourth place effort on the first two night, Lachlan Richardson (Gresford, New South Wales, Australia) concluded the third day of action at Ranchman’s second, to earn his fourth Top 10 finish in as many nights. Banking 105 world points through four events, the Aussie bull rider rose to the No. 46 spot in the PBR’s World Standings. To begin the night, Richardson rode Corona Light (Vold Rodeo) for 75 points in Round 1, adding an 87.5-point trip to his total on Ray’s Lasty Jump (Giorletz Rodeo Stock) in the Championship Round.

Concluding the three-event sprint, Richardson earned 30 of his 105 total world points, in addition to $3,672.

Gloria tamed OLS Tubs Sweat & Regret (Outlaw Buckers Rodeo Corp.) to win Round 1 with an 86-point score, however, was bucked off bull of the Night, Grey Tower (Vold Rodeo) in the Championship Round.

The Brazilian heads to his next event, Edgerton, Alberta, which is the next stop on the Touring Pro Division, with 20 world points and $2,425.50.

Rounding out the Top 5 was the third Canadian on the results sheet in Chase Thielen (Milk River, Alberta). His finish was backed by an 85-poiny trip on Whoote Blues (Vold Rodeo) in Round 1.

Grey Tower was the high-marked bull of the event, scoring 45.5-points for his 3.02-second buck off Gloria in the Championship Round. This was Vold Rodeo’s second bull of the night title at Ranchman’s in 2018.