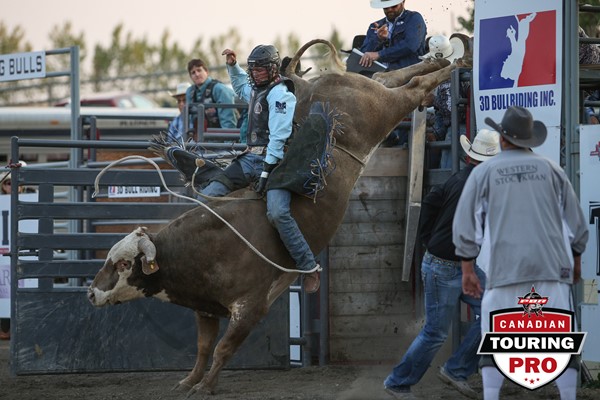 He began the event with an 85-point trip on Muddy Water (X6 Ranch Bucking Cattle), heading into the championship round second in the aggregate.

Finishing strong, after earning a re-ride, Parsonage made the 8 aboard Second Hand Snuff (Flying High Rodeo Co.) for 78.5 points to propel him to the win at the event hosted by Two Bit Ranch’s Josh Berezay.

In the national standings he rose two positions, now ranked No. 7, while in the world standings he moved from No. 68 to No. 57, now 327.5 points behind No. 35 Emilio Resende (Santa Helena do Goias, Brazil) and a berth onto the elite 25th PBR: Unleash The Beast.

Dayton Johnston (Milk River, Alberta) finished second after winning the event’s opening round compliments of an 86-point trip on Double Major (Wild Hoggs/Corey Chmelnyk). His efforts in front of a home province crowd earned him $3,169.79, 195 Canadian and 30 world points.

After beginning the event No. 14 in the national standings, the runner-up finish allowed him to crack the Top 10 where he is now 1,427.49 points back from the top spot.

His qualified ride came in Round 1 when he covered Friday Night Blues (X6 Ranch Bucking Cattle) for 83.5 points.

Marking his 13th Top-5 result in Canada this year, Richardson surged to the No. 1 position in the national standings, overtaking Brock Radford (De Winton, Alberta) who he now leads by 94.99 points.

As part of the Touring Pro Division stop, the championship round featured a 12-bull ABBI Canada Classic event won by Vold Rodeo’s Wicked Dreams who was marked 89.75 points for his buckoff of Johnston.