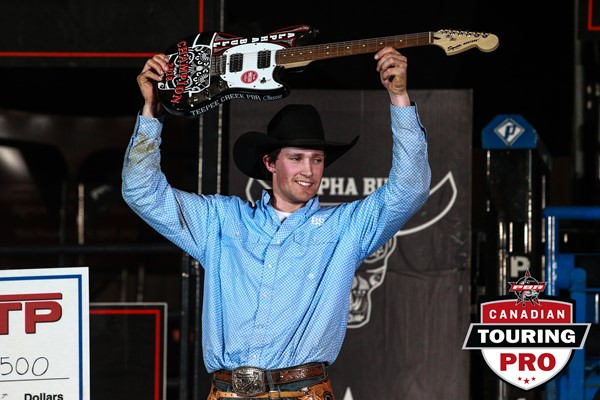 Parsonage rode Ray’s Last Jump (Girletz Rodeo Stock) for 84 points in Round 1, before covering OLS Tubs Anika’s Pet (Outlaw Buckers Rodeo Corp.) for 87 points in the Championship Round to seal the victory.

In addition to his $3,368.30 in earnings for the first-place finish, Parsonage collected the $3,500 Lyon’s Production Services’ event bonus, leaving Teepee Creek with a $6,868.30 paycheck.

In 2017, despite multiple injuries, Parsonage maintained the highest riding percentage of all Canuck riders at PBR Canada events (66.6%). He went 16-for-24 during the year, finishing 2017 the No.8- ranked rider in the Canadian national standings.

While he failed to earn Canadian or world points in Lethbridge last week where he was seventeenth, Parsonage climbed to No.2 in the PBR Canada Standings courtesy of the 276.66 Canadian points he won in Teepee Creek. The Saskatchewan-native also netted 60 world points, now ranked No.74 spot in the PBR world standings.

For his effort, Raford left Teepee Creek with $2,538.27, 30 world points and 220 Canadian points. Radford currently leads No.2 Parsonage by 80.84 points in the Canadian national standings.

In third was two-time and reigning PBR Canada Champion Zane Lambert (Ponoka, Alberta). In Round 1, Lambert rode City Limits (Outlaw Buckers Rodeo Corp.) for 84 points, which he followed with another 84-point score, this one on Oklahoma Blues (Girletz Rodeo Stock), in the Championship Round.

Third-year pro Logan Biever (Claresholm, Alberta) finished fourth after putting up the highest score of the event, 88.5 points on Papa’s Rock Star (Vold Rodeo/Prescott) in the Championship Round. Biever began the night with a 78-point score on Crack (Outlaw Buckers Rodeo Corp.) and won $1,413.72, 15 world points and 140 Canadian points.

Rounding out the Top 5 was another Saskatchewan bull rider, Cody Coverchuk (Meadow Lake). Coverchuk was the last man to go 2-for-2 on the evening, riding Days of the Year (Vold Rodeo/Prescott) for 79 points in Round 1 and Brahma Boots Chrome (Outlaw Buckers Rodeo Corp.) for 87 points in the Championship Round.

Get it Poppin’ (Dynamite Buckers), raised and owned by 2011 PBR Canada Champion and current safety man, Tyler Thomson, earned the top bull score of the night. The bovine athlete earned a bull score of 44 points against Cooper Zur in Round 1.

Next up on the PBR Canada Schedule for 2018 is the beginning of the third season of the premier Monster Energy Tour, on March 24th in Calgary, Alberta at the Agrium Western Events Centre on Stampede Park starting at 7:00pm. Tickets are on sale now at Ticketmaster.com