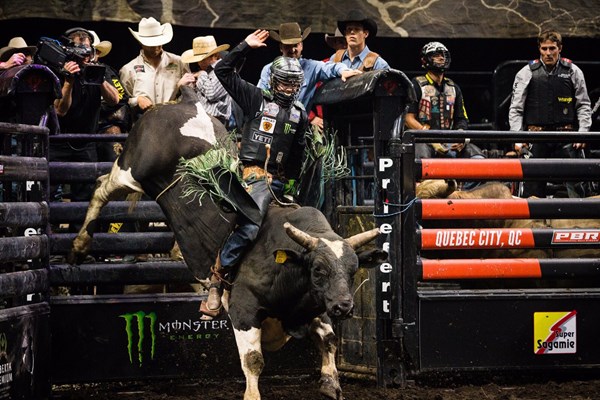 QUÉBEC CITY, Québec – Ahead of the second-ever International Major, PBR (Professional Bull Riders) Canada has announced a format change for the May event, now set for one-day only, Saturday May 19, at the Vidéotron Center in Québec City, Québec.

The Monster Energy Tour Canadian Iron Cowboy, presented locally by Couche-Tard, will now feature a field of 20 riders, including top athletes from both Canada and abroad, competing in the first-ever bracket-style event in the nation.

For the entire night, fans will be kept on the edge of their seats as riders go head-to-head not only against their animal athlete opponents, but also their fellow competitors, in an effort to be crowned the nation’s first Iron Cowboy.

The change in structure comes on the heels of the premier 25th PBR: Unleash The Beast’s Iron Cowboy in Arlington, Texas, this February which attracted more than 46,000 bull riding enthusiasts, making it the most successful one-day, regular season event in PBR history.

“This competitive format for an event is an annual favorite for our fans in the United States, Brazil and Australia, where we have the opportunity to pit the world’s best riders and bulls against one another in one night of edge-of-your-seat action,” said PBR’s Senior Vice President of Events Dave Cordovano.

“We’re excited to continue building our International Major in Quebec City, where this year fans will see not only the ultimate showdown of man vs. beast, but also rider vs. rider, a format never before seen in the nation.”

Those set to ride will include the Top 4 Canadians and Top 10 international riders from the PBR world standings, and Top 6 athletes from the PBR Canada national standings at the close of entries.

Riding as one of the six athletes from the national standings, competing as a Canadian invitee, is Quebec’s own Zac Bourgeois (Saint-Tite). While the teen sensation competed in the junior bull riding exhibition in 2017, he will be making his PBR International Major debut inside the Vidéotron Center powered by a home province crowd.

To begin the night, all entered riders will attempt one bull each in Round 1. The Top 8 will then advance to the three-round, knockout bracket where the last rider standing will be crowned PBR Canada’s Iron Cowboy.

Should fewer than eight riders log a qualified ride in Round 1, the remaining bracket slots will be filled based on buckoff time.

The event will conclude with the Top 2 riders from the evening competing in the much anticipated showdown for the event title, in addition to their portion of the tour’s largest purse of the season and 300 world points.