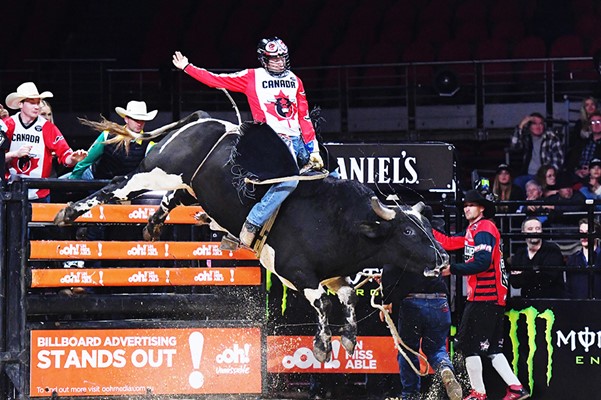 After going 6-for-9, Team Canada sits fourth after the first night of competition at the Sydney PBR Global Cup.

SASKATOON, Saskatchewan - After a perfect 4-for-4 start to the Saturday night event in Qudos Bank Arena, Team Canada slipped to fourth at the conclusion of the first night of competition for the second stop of the inaugural PBR (Professional Bull Riders) Global Cup in Sydney, Australia.

As the first Canadian to leave the chutes down under, Tanner Byrne (Prince Albert, Saskatchewan) gave the nation a quick start, marked 79.5 points on Annihilation (Brandenburg Bucking Bulls).

Based on their Round 1 performances, coach, and three-time PBR Canada Champion Aaron Roy selected Byrne and Parsonage to return as the nation’s two competitors in the Bonus Round.

Not to disappoint, both riders, who each stand more than six-feet tall, covered their Bonus Round draws, making the 8 on SweetPro’s Hillbilly Deluxe (Maynes Bucking Bulls) for 83.5 points, and Bring The Action (Throsby & Russell Bucking Bulls) for 82.25 points, respectively.

The Bonus Round proved to be the critical factor allowing Team Brazil to take the lead over Team Australia after the host nation failed log a qualified ride and Brazil’s Pacheco successfully rode High Flying Akubra (John Gill & Sons) for 83 points to nab the lead after the first day.

Pacheco, who has made the 8 more than any other rider in the last three seasons in the PBR’s elite series, was Team Brazil’s top rider of the night, going 2-for-2 for an aggregate score of 164.25.

After winning the inaugural event in Edmonton, the American roster was led by team captain Davis, who also leads the individual aggregate race after the first night, going 2-for-2 to total 171.5 points.

After covering Lock n Load (Peter Wallace) for 85 points in the opening round, Davis broke Unbroken (Brandenburg Bucking Bulls) for 86.5 points in the Bonus Round – the highest score of the event’s final round. The qualified ride snapped the bovine’s previous 14-out unridden streak.

Lockwood, however, came up short in the Bonus Round, bucked off by PBR Australia Stock Contractor of the Year Dakota Brandenburg’s Take the Gamble, who earned the top bull score of the night with 44 points.

Each rider from the four visiting nations will once again get on one bull each, while 10 of Australia’s best will attempt one from the rank pen, followed by the Bonus Round where the team’s coach will select two riders who will attempt the nation’s final two draws of the Global Cup.

At the conclusion of the event, the nation with the highest score in the aggregate from their Top 12 qualified rides will be crowned the victors of the Sydney leg of the Global Cup.

The winning team will earn international bull riding bragging rights, a portion of the Australian record $750,000 prize-purse, and the Australian horn from the glittering Global Cup trophy filled with native soil.