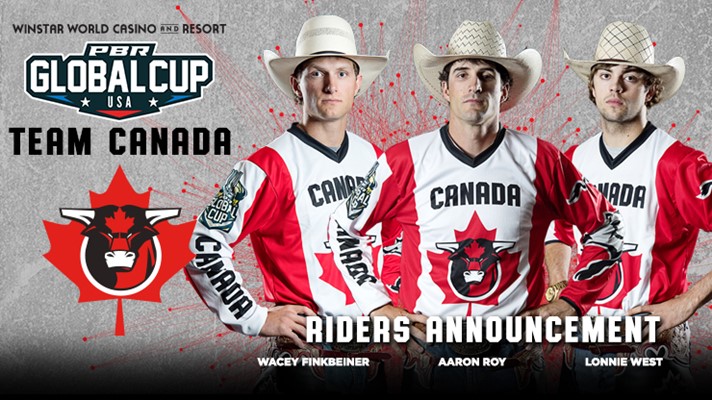 Aaron Roy, Lonnie West and Wacey Finkbeiner are the latest additions to Team Canada for the 2019 PBR Global Cup USA.

PUEBLO, Colo. – Ahead of PBR’s (Professional Bull Riders) 2019 WinStar World Casino and Resort Global Cup USA, three riders have qualified for Team Canada, headlined by three-time PBR Canada Champion Aaron Roy (Yellow Grass, Saskatchewan), who is poised to become the first rider in history to both coach and ride as a member of a competing nation.

The PBR Global Cup, the only nation vs. nation bull riding competition, will make its U.S. debut, and third stop, at AT&T Stadium in Arlington, Texas, on February 9-10, 2019. The new team tournament debuted in Edmonton, Alberta, in November 2017 and then visited Sydney, Australia, in June 2018.

Roy’s qualification comes after competing for the first time since fracturing his femur during Round 1 of the 2016 PBR World Finals. Exclusively competing on Canadian soil in 2018, the eight-time PBR World Finals qualifier earned three event wins and 13 Top-10 efforts en route to ending the year ranked sixth in the nation.

In his comeback season, the accomplished Canuck inched closer to becoming the first Canadian to eclipse $1 million USD in career earnings, with his winnings now totaling $995,799.07.

While Roy is familiar with the coaching role, leading the Canadian contingent to back-to-back third-place efforts at the two prior PBR Global Cups, he also adds a wealth of experience to the team having competed at the four editions of the PBR World Cup.

A member of Team Canada at the World Cup events held from 2007-2010, Roy notably delivered a 92.5-point ride aboard Frank Biddle’s Rocky Road at the inaugural World Cup in Australia in 2007 to help the nation to a second-place finish.

“I think it is going to be challenging, but I’m definitely up to it,” Roy said. “Super excited for our team this year and I think that we’re going to be strong contenders and one of those teams to look out for.”

One position remains to be filled on Team Canada, which Roy will announce in early January.

West will compete for the Canadian contingent after having ridden on the team in both Edmonton, going 2-for-3 after earning his spot on the team as the winner of the nation’s qualifying event, and Sydney, where he went 1-for-2.

The 23-year-old recently completed a career-best season in 2018, making his elite tour debut in Billings, Montana, in April. He competed at two additional stops, including a fourth-place effort in Tulsa, before a shoulder injury sidelined him for the remainder of the regular season. West, however, qualified to the 2018 PBR World Finals as an alternate, and made his debut in Round 2. He concluded the year a career-high No. 37 in the world standings.

The 26-year-old made his Global Cup debut in Sydney.