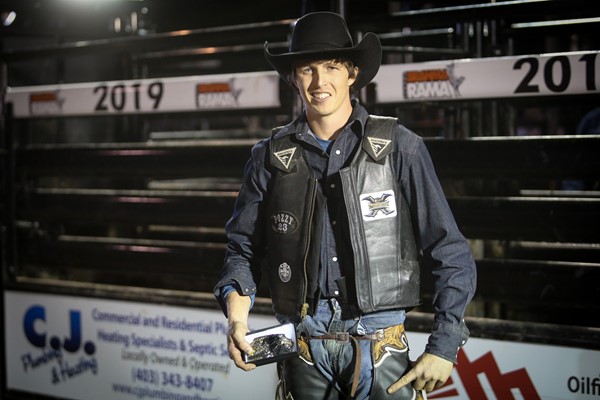 ELNORA, Alberta – As one of three riders to go a perfect 2-for-2 Saturday night at the Elnora Ag Grounds, Garrett Green (Meeting Creek, Alberta) captured his first PBR event win of the season, victorious at the Elnora Brahma Rama.

The home province hopeful began the event on a strong note, recording the third highest marks of the first round after he reached the 8 aboard Preacher Man (X6 Ranch Bucking Cattle) for 83 points.

He then surged to the top of the leaderboard when he covered Rhythm & Blues (Flying High Rodeo Co.) for an event-high 89.5 points in the championship round.

After riding Speak Easy (X6 Ranch Bucking Cattle) for 84.5 points in Round 1, he remained flawless when he reached the whistle aboard Throwin Shade (Flying High Rodeo Co.) for 86 points in the final round.

Continuing his return to competition after undergoing knee surgery at the conclusion of the 2018 season, Brock Radford (De Winton, Alberta) concluded the annual event both third and fourth via a double entry.

His third-place result was backed by an 81.5-point ride on Irish Rebel (Wilson Rodeo) in Round 1 and an 87-point ride on Shere Khan (X6 Ranch Bucking Cattle) in the championship round, while his fourth-place finish was headlined by an 85.5-point, Round 1-winning trip on Done Talking (Eno Bucking Bulls).

On the hunt for his first national title, Radford is now ranked inside Canada’s Top 20 for the first time in 2019. The two Top-5 finishes propelled him from No. 29 to No. 18 in the nation.

Gloria’s performance in Elnora was backed by an 81-point ride on Razed Country (Flying High Rodeo Co.) in Round 1.