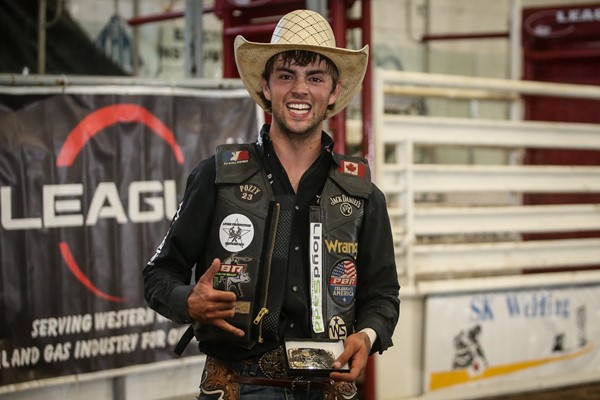 Lonnie West went a perfect 2-for-2 to win his first PBR Canada event win of the season in Coronation, Alberta. Photo: Covy Moore/CovyMoore.com.

Competing a mere hour from his home town, the Albertan began the event on a high note, winning Round 1 with an 84.5-point effort aboard Kubota’s Summer Warrior (Wild Hoggs/Chmelnyk/Bryant).

As the last man to leave the chutes in the championship round, West continued the momentum. He reached the 8 aboard OMB Legal Issues (Wilson Rodeo) for an event-best 88.5 points.

The finish came at a crucial time for West as he prepares to travel to the United States to compete at this weekend’s elite Unleash The Beast event in Nashville, Tennessee on Aug. 24-25.

West entered the event having gone just 10-for-49 (20.41%) thus far in 2019, shutout in his three most recent events after recording a season-best, second-place effort in late July in Manor, Saskatchewan. His season was nearly derailed in February, when while competing for Team Canada at the PBR Global Cup USA he broke his leg.

With this season’s PBR Canada Finals in Saskatoon, Saskatchewan set to take only the nation’s Top 20 riders, West inched closer to securing his third qualification to the season-ending event, which is also poised to award a $50,000 bonus to this season’s champion.

After making his debut on Canadian soil in early June, Buttar has ridden to four event wins and six additional Top-5 finishes. He has gone 22-for-31, for an impressive 70.96% riding average.

First riding OMB Full Sleeve (Wilson Rodeo) for 83.5 points in Round 1, Buttar remained flawless in the championship round when he covered Homegrown (Eno Bucking Bulls) for 87.5 points.

The runner-up effort allowed him to surpass Shay Marks (Sunnybrook, Alberta) in the national standings. Buttar is now ranked No. 2, a mere 199.99 points behind No. 1 Jared Parsonage (Maple Creek, Saskatchewan).

His finish was backed by an 83-point trip on Pretty in Prison (Flying High Rodeo Co.) in the first round. In the championship round he was called for a slap against Buck Nasty (Foley Bucking Bulls).

Fourth went to Kache Moosman (Price, Utah), earning the American $941.95, 95 Canadian and 15 world points for his trip to the Great White North.

His 8-second effort was also seen in Round 1, marked 82 points atop Done Talking (Eno Bucking Bulls)

Rounding out the Top 5 was current Canadian No. 1 Parsonage who covered Razed Country (Flying High Rodeo Co.) for 80.5 points in Round 1.