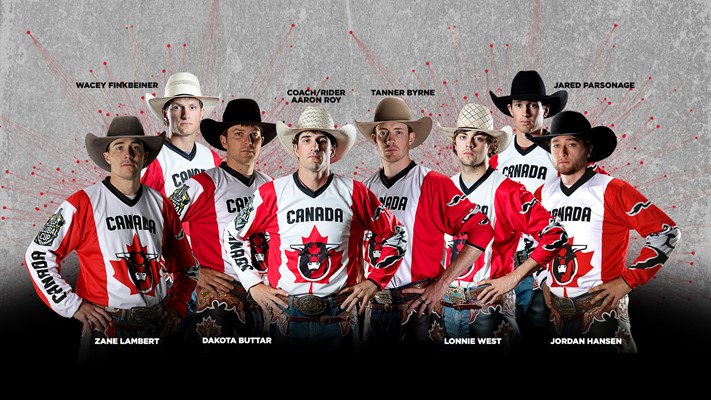 The third leg of the inaugural PBR Global Cup will take place in Arlington, Texas at AT&T Stadium on Feb. 9-10.

ARLINGTON, Texas – Ahead of the third edition of the PBR (Professional Bull Riders) Global Cup, the final Team Canada roster has been announced, with three-time Canadian Champion Aaron Roy (Yellow Grass, Saskatchewan) set to make history as the first athlete to both coach and ride for a competing nation.

The PBR Global Cup, the only nation vs. nation bull riding competition, will make its U.S. debut, and third stop, at AT&T Stadium in Arlington, Texas on February 9-10, 2019 with the 2019 WinStar World Casino and Resort PBR Global Cup USA, presented by Monster Energy. The new team tournament debuted in Edmonton, Alberta in November 2017 and then visited Sydney, Australia in June 2018.

While, seven-time PBR World Finals qualifier Roy has coached the Canadian contingent at the past two editions of the event, with the team finishing third in both Edmonton, Alberta and Sydney, Australia, the U.S. stop will mark his first time riding as part of the roster.

Competing exclusively on Canadian soil in 2018, his first season riding since fracturing his femur during Round 1 of the 2016 PBR World Finals, Roy qualified to the team via the Canadian national standings. Last season, Roy finished No. 6 in Canada earning three event wins.

Elite tour staples Tanner Byrne (Prince Albert, Saskatchewan) and Dakota Buttar (Kindersley, Saskatchewan) will return for their third appearance on Team Canada. Currently the top-ranked Canucks in the world standings, they will travel to Texas ranked No. 28 and No. 31 respectively.

At the latest edition of the Global Cup in Sydney, Byrne led Team Canada, going a perfect 4-for-4. Overall he is 5-for-7 (55.56 percent) at the Global Cup, and his five rides is tied with 2016 World Champion and Team USA-Eagles captain Cooper Davis (Jasper, Texas) for the most in Global Cup history.

Byrne will also ride at the upcoming edition of the Global Cup with momentum at his back. The 26-year-old finished fifth on the PBR Unleash The Beast last weekend in Oklahoma City to rise more than 30 spots in the world rankings.

Also competing for the nation for the third time is Lonnie West (Cadogan, Alberta), Canada’s top performing rider at the inaugural event in Edmonton. After competing at his career-first PBR World Finals in 2018 as an alternate, West has been a staple on the league’s elite tour, recording his best finish in Glendale, Arizona where he was 14th.

On hand in case of injury will be alternate Wacey Finkbeiner (Ponoka, Alberta), part of the third-place Team Canada contingent that competed in Sydney.

CBS will also televise a one-hour highlight special from the opening night’s bonus round on Sunday, February 9 at 11:00 a.m. CST, check your local listing.

Tickets for the 2019 WinStar World Casino and Resort PBR Global Cup USA, presented by Monster Energy, are on sale now and start at just $10. They can be purchased at SeatGeek.com or the AT&T Stadium Box Office.