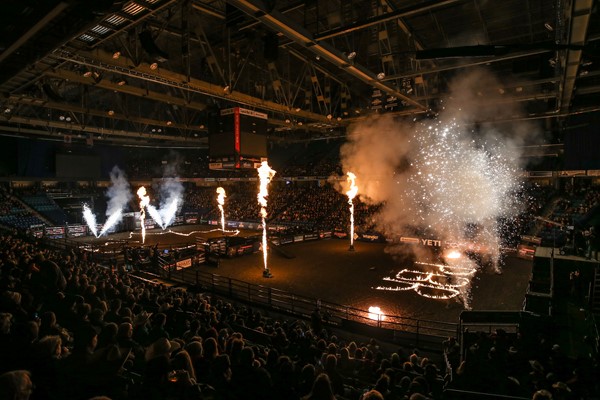 For the tenth consecutive year, PBR Canada will host the nation's finals at the SaskTel Centre on November. 22-23. Photo: Covy Moore/CovyMoore.com.

SASKATOON, Saskatchewan – For the tenth consecutive year, PBR (Professional Bull Riders) Canada will return to Saskatoon, Saskatchewan and the SaskTel Centre for the PBR Monster Energy Canadian Finals, presented by Dakota Dunes Casino, on Nov. 22-23 when the 2019 PBR Canada Champion will be crowned.

Season long, riders have the opportunity to compete at more than 30 Monster Energy Tour and Touring Pro Division events across Canada to earn points towards the Canadian National Standings, all in an effort to be the No.1-ranked cowboy at year’s end and earn the coveted PBR Canada title.

Throughout the decade of season-culminating action in Saskatoon, the SaskTel Centre has played host to many monumental moments.

Among those milestone moments, Aaron Roy (Yellow Grass, Saskatchewan) has been the focus of two.

In 2010, the first year the SaskTel Centre hosted the PBR Canadian Finals, Roy became the first competitor in league history to be crowned the PBR Canada Champion in multiple seasons. After first capturing the title in 2008, Roy capped a dominant 2010 season, where he went 26-for-33 (78.79%) and won four event titles, with his second championship.

After making his return to competition in 2018, riding for the first time since fracturing his femur during Round 1 of the 2016 PBR World Finals, Roy is anticipated to contend for his fourth title this November. In 2018, Roy concluded the year No. 6 in the standings, and is already within the Top 20 in the early 2019 rankings.

Another rider to etch his name in the PBR record books while competing inside the SaskTel Centre is Zane Lambert (Ponoka, Alberta), the only rider in history to qualify for all editions of the season-culminating event.

Two of Lambert’s most memorable moments were witnessed by fans in 2017. Not only did the Ponoka-native become the first rider to win the PBR Canadian Finals in multiple seasons, winning the event in 2016 and 2017, but he also joined Roy as the only other athlete to win the national championship in multiple years, crowned the 2017 PBR Canada Champion after previously capturing the honor in 2013.

Historically, this season-culminating event has featured numerous Saskatchewan riders experiencing great success while competing in front of home province crowds. In the current PBR Canada national standings, the No. 1 ranked rider Jared Parsonage (Maple Creek) hails from the province and is expected to be a top contender for the title come November.

Additionally, two Saskatchewan riders, Dakota Buttar (Kindersley, Saskatchewan) and Tanner Byrne (Prince Albert, Saskatchewan), will once again be able to compete at the event, with the PBR Canadian Finals positioned after the elite PBR Unleash The Beast World Finals for the second-consecutive year.

The bull riding action begins at 7:30 p.m. CT on both Friday, November 22 and Saturday, November 23. All bull riders will get on one bull each in Round 1 on Friday night and Round 2 on Saturday night. The Top 10 will then advance to the championship round where both the event winner and 2019 PBR Canada Champion will be crowned.