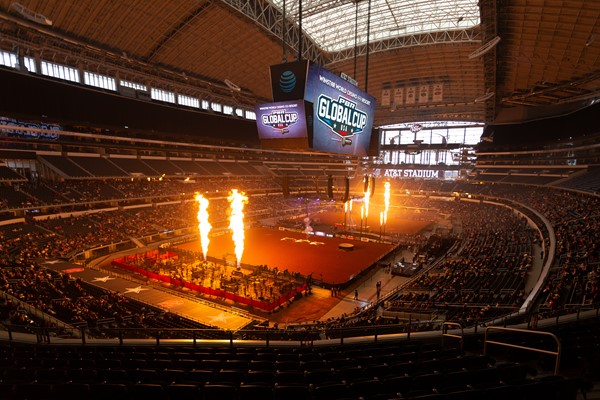 After last visiting the city in February 2019, the PBR Global Cup will return to Arlington, Texas and AT&T Stadium on Feb. 15-16, 2020 for the next edition of the PBR Global Cup. Photo: Leobardo Loera/Bull Stock Media.

ARLINGTON, Texas – After debuting in the U.S. in 2019 with one of the most exciting bull riding events in the sport’s history, the PBR (Professional Bull Riders) Global Cup will return to the United States for the next edition of the five-nation tournament, bucking into AT&T Stadium in Arlington, Texas with the 2020 WinStar World Casino and Resort PBR Global Cup USA, presented by Monster Energy, on February 15-16.

Tickets for the two-day event go on sale on Friday, May 17 and start at $10. Pre-sale for PBRewards will begin on Monday, May 13 and for AT&T Stadium on Tuesday, May 14. Tickets can be purchased at the AT&T Stadium Box Office, online at ATTStadium.com or SeatGeek.com, or via the phone at (800) 732-1727.

The event in Feb. 2020 at the NFL’s largest stadium will mark the fourth edition of the PBR Global Cup. The home of the Dallas Cowboys hosted the first-ever edition of the event on U.S. soil in February 2019, welcoming more than 60,000 fans -- the largest crowd in Global Cup history. The event’s electrifying U.S. debut featured a down-to-the-wire, ride-for-ride bucking battle between the Team USA Eagles and Team Brazil, with the South American contingent ultimately winning their second consecutive Global Cup Championship.

Ahead of the 2020 event, however, PBR has announced several competitive changes, further intensifying the battle to be crowned the toughest nation on dirt.  In past seasons, seven-man teams have gone head-to-head with their Top 12 scores counting towards each team’s event standing. Beginning in 2020, six-man contingents will compete against one another, with their Top 10 scores tallied.

Additionally, the teams will once again be led by a PBR-chosen coach; however, all teams will now also have an assistant coach, a position which was optional in 2019.

All riders and coaches set to compete at the 2020 WinStar World Casino and Resort PBR Global Cup USA, presented by Monster Energy, will be announced in the future.

The bull riding action begins on Saturday, February 15 at 6:45 p.m. CT, concluding on Sunday, February 16 at 1:45 p.m. CT. Each night, all six competing riders will attempt one bull each. Following the conclusion of the long round, each coach will select two riders to attempt an additional bull in the bonus round as selected in the nightly snake draft.

“In 2019, PBR made history inside AT&T Stadium by bringing fans one of the most exciting bull riding events in PBR's history and in giving an all Native American team the historic opportunity to compete on an international stage," said Sean Gleason, CEO, PBR. “We're excited to bring the PBR Global Cup again to Arlington, Texas, a community that's rich with avid PBR fans, and to continue our long-standing partnership with the Dallas Cowboys, who have been a great partner to PBR and instrumental in the staging in some largest events in sports.”

After 1.2 million viewers tuned into broadcast coverage of the event in 2019, CBS Sports will televise the 2020 PBR Global Cup USA on network television, which will also be brought to fans on RidePass, the PBR’s western sports digital network.

For an enhanced PBR experience, fans can now purchase PBR Elite Seats and Premium Experiences, which provide a behind-the-scenes look into the toughest sport on dirt.

These premium options include early entry; tickets to a premium seating section; a catered reception; a pre-event, backstage tour by a PBR Host, featuring a PBR 101 presentation and visit with the sport’s fiercest bovine athletes; and the opportunity for photos and autographs from the sport’s top stars.

Fans will also have the opportunity to purchase a vast array of Premium Experience offerings including a VIP guided tour of AT&T Stadium followed by a custom three-course meal in the Dallas Cowboys’ locker room. For a full list of the options, visit PBR.com/GlobalCup.

For more information on the upgraded experiences fan can also contact PBR Direct at 800-732-1727.

The event will feature entertainment all weekend long including a Global Cup Fan Zone filled with family-friendly activities, which will be announced in coming months. Fans are encouraged to visit PBR.com/GlobalCup to check for updates.