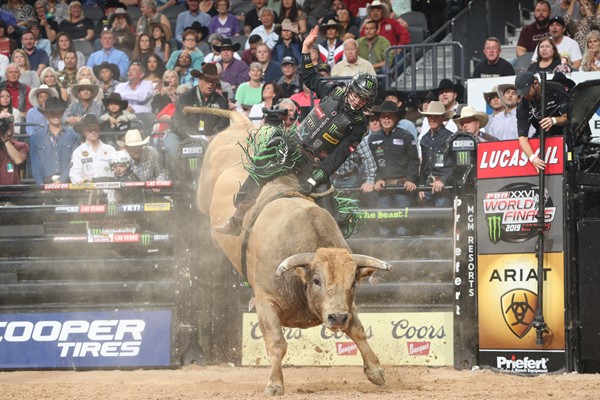 SASKATOON, Saskatchewan – Ahead of the 2019 PBR Monster Energy Canadian Finals, presented by Dakota Dunes Casino, PBR (Professional Bull Riders) Canada has announced the Top 12 contenders for the coveted Bull of the Year Honor. No. 1 Homegrown has a razor-thin, 0.4-point lead over both No. 2 Happy Camper, who enters the season-culminating event attempting to become the first-ever two-time PBR Canada Bull of the Year, and Uptown Funk.

In addition to receiving the coveted buckle, the Bull of the Year will also be presented with a $3,500 bonus.

The bovine athletes in Saskatoon will also be competing for the 2019 PBR Canada Bull of the Finals honor and accompanying $1,000 bonus. Each of the 73 bulls set to buck inside the SaskTel Centre are eligible for the award to be presented to the high-marked bull of the event.

Concluding the season with a league-best 44.5-point average, Homegrown will make his second consecutive PBR Canada Finals appearance on the heels of his PBR World Finals debut. As one of 10 Canadian bucking bulls selected to compete at the prestigious event in Las Vegas, Homegrown earned two trips, marked 43.75 points each time – for his 6.65-second buckoff of Ryan Dirteater (Hulbert, Oklahoma) in Round 3, and 7.58-second buckoff of Derek Kolbaba (Walla Walla, Washington) in Round 5.

Homegrown recorded 18 outs across all levels of competition in 2019, ridden just twice. He was first covered by Joao Ricardo Vieira (Itatinga, Brazil) for 87 points at the Unleash The Beast stop in Billings, Montana in April. PBR Canada title contender Dakota Buttar (Kindersley, Saskatchewan) then reached the 8-second whistle on Homegrown, marked 87.5 points on the Touring Pro Division in Coronation, Alberta in August.

Among his Top 5 scores on Canadian soil in 2019, the Eno Bucking Bulls’ athlete was twice marked a career-high 45 points. Homegrown first recorded the marks in June in Falher, Alberta when he dispatched Logan Biever (Claresholm, Alberta) in 5.47 seconds. He repeated the top score in August in Stavely, Alberta, for besting Nick Tetz (Calgary, Alberta) in a swifter 3.99 seconds.

Close behind, within 0.4 points and tied for second in the bull standings alongside Uptown Funk, Happy Camper is on the verge of making history as first-ever two-time PBR Canada Bull of the Year. The two-time Monster Energy Tour Bull of the Event in 2019 concluded this season’s campaign with a 44.1-point average.

Happy Camper bucked six times in PBR Canada competition in 2019, led by two 44.5-point marks. He first recorded the score at the first-ever Monster Energy Tour event in Lethbridge, Alberta for his 3.22-second trip with Jake Lockwood (Volborg, Montana) to be the top-marked bovine and repeated the score at his return to competition this September at his home event in Magrath, Alberta after besting Brock Radford (De Winton, Alberta) in 3.81 seconds.

While not reflected in his season average, Happy Camper made two trips stateside in 2019, including his third consecutive selection to the PBR World Finals. Bucking in Round 3, the Two Bit Bucking Bulls’ athlete was covered for 88 points by Luciano de Castro (Guzolandia, Brazil).

In addition to being poised to become the first-ever two-time PBR Canada Bull of the Year, should Happy Camper also earn the Bull of the Finals title, an honor he also won in 2018, he’d further etch his name in the PBR record books. In PBR Canada history, only two bulls have been named the Bull of the PBR Canadian Finals in consecutive seasons – Eno Bucking Bulls’ Unabomber (2008, 2009) and Vold Rodeo’s VJV Slash (2010, 2011).

Uptown Funk, along with Happy Camper, also concluded the season with a 44.1-point average.

The fierce bovine was the Monster Energy Tour Bull of the Event two times – in Halifax, marked 43 points for his 3.44-second buckoff of two-time PBR Canada Champion Zane Lambert (Ponoka, Alberta), and in Abbotsford, scored 43.5 points when he was ridden by Biever for 87 points.

Uptown Funk also posted two massive 45-point-plus trips in 2019. After recording his then career-best out in July in Manor, Saskatchewan, scored 45 points for his 5.55 seconds of work with Coy Robbins (Camrose, Alberta), Uptown Funk shattered his own personal best just one month later. In August, bucking in Stavely, Alberta, the Vold Rodeo bovine was marked 45.5 points for sending Michael Ostashek (Edson, Alberta) to the dirt in a quick 2.12 seconds.

On the Monster Energy Tour, No. 7 One for the Money concluded the year with a league-best three Bull of the Event honors: Quebec (44 points), Moncton (43.5 points) and Halifax (43 points).  No. 4 Firebeatz also earned the regular-season honor once on the nation’s premier tour, topping the bull pen at the final event of 2019 in Edmonton, Alberta. The Foley Bucking Bulls’ athlete was marked 43.5 points when he was ridden by Lambert for 87 points. One for the Money and Firebeatz trail the top ranking by 0.8 and 0.5 points, respectively.