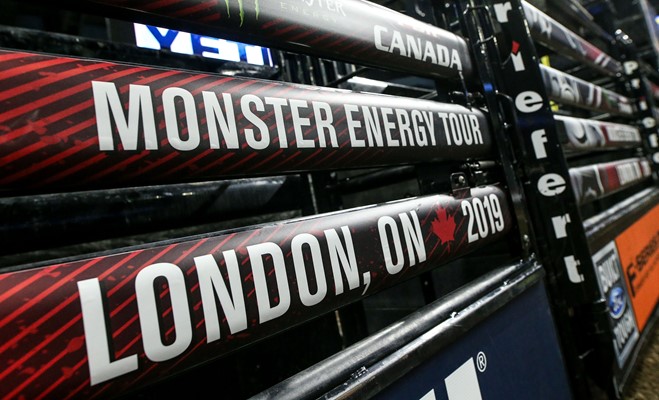 LONDON, Ontario – In 2020, for the second consecutive season, and third time in tour history, PBR (Professional Bull Riders) Canada’s premier Monster Energy Tour will buck into London, Ontario, with the “toughest sport on dirt” set to invade Budweiser Gardens on May 9, 2020 for the London Classic.

In 2019, PBR’s elite Monster Energy Tour returned to London for the first time in two years after last stopping in the city in 2016.

At the event, phenom Daylon Swearingen (Piffard, New York) dominated Round 1 with an 84.5-point score aboard Black Sails (Triple R Bull Co.) to catapult him to his third event victory of 2019. Garnering 450 Canadian and 170 world points, the then 19-year-old rose to No. 2 in Canada and No. 27 in the world.

Fast forward five months and Swearingen is now a top contender for the 2019 PBR Canada Championship and accompanying $50,000 bonus. Winning the final regular-season Monster Energy Tour stop of the year in Edmonton, Swearingen is now ranked No. 4 in Canada, within 689.57 points of the No. 1 ranking.

In the broader PBR world standings, Swearingen is also in position to claim the prestigious PBR Rookie of the Year title. Presently No. 11 in the world, and second in the race amongst first-year, elite tour professionals, the New York native is within 410.41 points of the standings leader.

Looking beyond the competitive fervor on display at the 2019 event in London, which played an integral role in shaping the national standings, the race to be crowned the 2019 PBR Canada Champion has been one of the most intense in league history.

Jared Parsonage (Maple Creek, Saskatchewan) reigned atop the rankings for the majority of the season, until an awe-inspiring, second-half push by Dakota Buttar (Kindersley, Saskatchewan) led him to slip to No. 2 on Sept. 13. Buttar stormed onto home soil in June, going an impressive 35-for-38 (65.79%), winning a season-high five event titles across all levels of competition, en route to capturing the nation’s top ranking.

At the final regular-season Monster Energy Tour event of 2019, however, Parsonage’s discontentment with No. 2 was undeniable. Going a perfect 2-for-2 to finish fifth, the Maple Creek man leap-frogged Buttar in the standings, reclaiming the No. 1 spot by 32.49 points.

The bull riding action begins at 7:00 p.m. ET on Saturday, May 9 at Budweiser Gardens. All riders will attempt one bull each in Round 1 on Saturday. The Top 10 will then advance to the championship round for one more out and a chance at the event title. In addition to competing for points towards the Canadian national standings, riders will also have the opportunity to earn world points in an effort to earn a berth onto the elite PBR Unleash The Beast. As part of the Monster Energy Tour, riders have the opportunity to earn increased world points, with the event winner netting 170 world points.