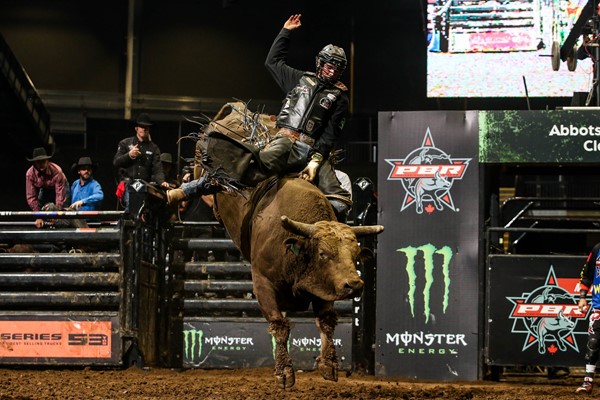 Jared Parsonage will enter the 2019 PBR Canada Finals as the No.1 ranked rider in the nation. Photo: Covy Moore/CovyMoore.com.

SASKATOON, Saskatchewan – Capping one of the most fiercely contended Canadian national championship races in PBR (Professional Bull Riders) history, the 20 athletes poised to go head-to-head for the 2019 PBR Canada Championship and accompanying $50,000 bonus on Nov. 22-23 in Saskatoon, Saskatchewan have been announced, headlined by World Finals competitors, and the nation’s current Top 3, Jared Parsonage, Dakota Buttar and Shay Marks.

Saskatchewan’s Parsonage and Buttar, and Alberta’s Marks, have been locked in a heated battle atop the rankings all season long. Heading into the 2019 PBR Monster Energy Canadian Finals, presented by Dakota Dunes Casino, Parsonage leads Buttar by a mere 32.49 points, while Marks is within 452.49 points of the top ranking.

One rider will have the opportunity to earn a maximum 2,250 national points with 250 points to be awarded to each round winner and 1,250 to the top scoring rider in the event aggregate.

Holding the nation’s No. 1 ranking for the majority of the season, Parsonage first ascended to the top spot after winning the first-ever Canadian Monster Energy Tour event in Lethbridge, Alberta in early March. Following a back-and-forth battle with now No. 5 Jordan Hansen throughout the spring, the 26-year-old reassumed the No.1 position following his second Monster Energy Tour event win of 2019, in Halifax, Nova Scotia on June 1.

While Buttar briefly surpassed him in September on the heels of a strong summer run, Parsonage used back-to-back fifth-place efforts on the Monster Energy Tour in Abbotsford, British Columbia, and Edmonton, Alberta, to conclude the regular-season as the top rider in Canada.

Regarded as one of the nation’s most consistent riders, Parsonage went 36-for-62 (58.06%) on home soil in 2019, recording two event wins and an additional 14 Top-5 finishes. Parsonage most recently competed at the first-ever PBR World Finals of his career, leading the Canuck contingent in going an impressive 4-for-6 to finish eighth in the aggregate.  Entering the 2019 PBR Canada Finals he has gone 8-for-10 at his past three events, holding a four-out ride streak on home soil.

As Parsonage’s top challenger, Buttar’s dominance in Canadian competition began on June 8, delivering a supreme 2-for-2 performance to win his debut event in Moose Jaw, Saskatchewan.

The event marked the Kindersley man’s first of the season on Canadian soil and also served as a rebirth to Buttar’s 2019 season previously thought to be over after sustaining a shoulder injury in April on the elite Unleash The Beast in Billings, Montana.

Buttar then went on an unchallenged run throughout the summer months, winning a league-best five Touring Pro Division stops to briefly hold the nation’s No. 1 ranking for the first time in his career. During the regular-season he went an impressive 25-for-39 (64.1%).

Much like Parsonage, Buttar will also compete at the PBR Canada Finals after qualifying for the prestigious PBR World Finals for the fourth time. Buttar, now a three-time Glen Keeley Award winner, went 1-for-4. His event ended early due to separated ribs sustained in Round 4.

Marks will be competing at the PBR Canada Finals for the first time since 2016 after reconstructive shoulder surgery in mid-2017 relegated him to the sidelines until this January. In an explosive return to PBR action, Marks won his first event back, victorious at the season-launch Monster Energy Tour event in Winnipeg, Manitoba in January, momentarily garnering him the No. 1 position in the standings.

Since, the Albertan has logged 16 additional Top-10 efforts, going 24-for-70 (34.29%) in Canada. Also venturing stateside, Marks made his PBR World Finals debut in 2019, competing in the fourth and fifth rounds as an alternate.

In 2019, Swearingen became the youngest athlete ever to qualify for both the PBR World Finals and Wrangler National Finals Rodeo, where he will compete alongside fellow qualifier Hansen. Swearingen, who won two regular-season Monster Energy Tour events in London, Ontario, and Edmonton, Alberta, concluded the year No. 13 in the PBR world standings and third in the Rookie of the Year Race.

Roy, who mounted a second-half surge to crack into the Top 10, backed by his first-ever win at the prestigious Glen Keeley Memorial PBR, finds himself in contention to make further PBR history.

A three-time Canadian Champion, should he win the national title, and $50,000 bonus, Roy would further establish himself as the nation’s winningest rider as the only four-time champion and undeniable top-earner as the only Canadian to eclipse $1 million in the PBR. His current earnings total $1,016,312.47.

Despite being ranked outside the Top 10, No. 11 Zane Lambert is also in historic positioning. He is now the lone rider to qualify and compete at all 14 editions of the PBR Canada Finals. A two-time PBR Canada Champion and Canadian Finals event winner, Lambert could join Roy as the second three-time champion, and become the lone rider to win the season-culminating event three times.

Fans will also have several home-province hopefuls to cheer for in the draw. Hailing from Maple Creek and Kindersley, respectively, Parsonage and Buttar are joined by fellow Saskatchewan riders Roy (Yellow Grass) and Todd Chotowetz (Major).

The complete list of qualifiers for this year’s PBR Monster Energy Canadian Finals, presented by Dakota Dunes Casino, are:

Tanner Byrne, Brett Monea and Ty Prescott were selected via rider vote to serve as the event’s bullfighters. Byrne will make history as the first athlete to have ever ridden and fought bulls at the season-culminating event.