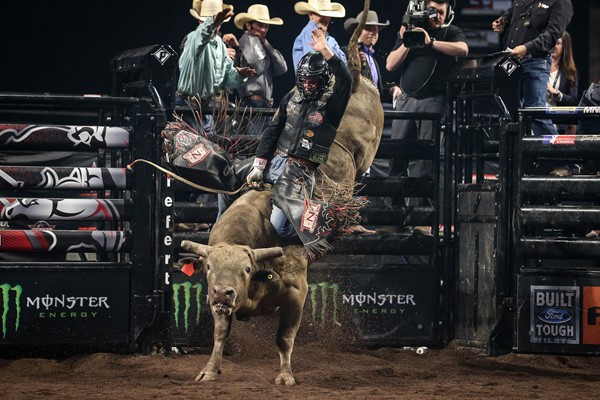 MONCTON, New Brunswick – In 2020, for the third time in tour history, PBR (Professional Bull Riders) Canada’s premier Monster Energy Tour will buck into Moncton, New Brunswick, with the “toughest sport on dirt,” set to invade the Avenir Centre on May 30 for the Moncton Classic.

After welcoming a sold-out crowd in 2018 at the PBR’s debut in Moncton, the Monster Energy Tour premiered inside the state-of-the-art Avenir Centre in May 2019, once again drawing an electric crowd.

This season, Michael Lane (Tazewell, Virginia) went 2-for-3 to capture his first event win on Canadian soil. After riding Hollow Point (Vold Rodeo) for 80 points in Round 1, the American cowboy surged to the event lead when he covered Black Sails (Triple R Bull Co.) for 82.5 points in the second round.

The event also featured a dominant performance by young gun Daylon Swearingen (Piffard, New York) who was propelled to a runner-up finish courtesy of his Round 1-winning, 86-point ride aboard Blackberry Smoke (Triple R Bull Co.).

Looking beyond the competitive fervor on display at the 2019 Moncton Classic, which played an integral role in shaping the national standings, the race to be crowned the 2019 PBR Canada Champion has been one of the most intense in league history.

In the current national standings, the Top 5 are within 1,150 points of one another, while the Top 3, No. 1 Dakota Buttar (Kindersley, Saskatchewan), No. 2 Jared Parsonage (Maple Creek, Saskatchewan) and No. 3 Shay Marks (Sunnybrook, Alberta), are separated by a mere 480 points.

The bull riding action begins at 7:00 p.m. AT on Saturday, May 30 at the Avenir Centre. All riders will attempt one bull each in Round 1 on Saturday. The Top 10 will then advance to the championship round for one more out and a chance at the event title. In addition to competing for points towards the Canadian national standings, riders will also have the opportunity to earn world points in an effort to earn a berth onto the elite PBR Unleash The Beast. As part of the Monster Energy Tour, riders have the opportunity to earn increased world points, with the event winner netting 170 world points.

Tickets for the Moncton Classic go on sale Friday, September 20 at 10 a.m. AT. They range in price from $25 to $100, standard fees apply, and can be purchased online at www.ticketmaster.ca. Tickets will be available in person at the Avenir Centre Box Office (150 Canada Street) beginning on Monday, September 23 at 9 a.m.