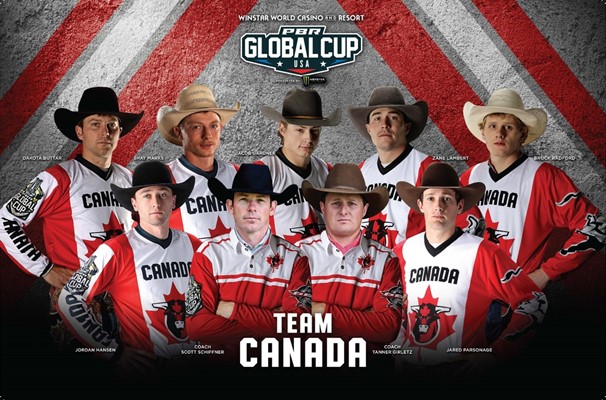 Each night of the two-day event, six of Team Canada’s riders will attempt one bull as assigned by the nation’s coach from those bovine athletes in their section. At the conclusion of each evening’s first round, the coach will then choose two riders to attempt one more bull each in the night’s bonus round.

The Top 10 qualified rides from each team will be counted toward their aggregate score, with the highest being named the 2020 PBR Global Cup USA Champion.

Looking to rebound from a less-than-stellar finish in 2019, Team Canada veterans Dakota Buttar (Kindersley, Saskatchewan) and Zane Lambert (Ponoka, Alberta) headline the roster, selected to the national team for each of the four editions of the event.

Buttar travels to the Lone Star State as the top-ranked rider in the PBR Canada national standings, victorious at both events he’s competed at on home soil. The three-time Glen Keeley Award winner is also the top-ranked Canuck in the world standings, currently No. 17.

Lambert is a five-time PBR World Finals qualifier and a former Unleash The Beast regular.

The veteran duo is joined by Jared Parsonage (Maple Creek, Saskatchewan) and Jordan Hansen (Okotoks, Alberta), both of whom also rode at the 2019 PBR Global Cup USA.

Last year in Canadian competition, Parsonage was one of the most dominant riders on home soil, leading the national standings the majority of the season after winning two event titles on the prestigious Monster Energy Tour.

Prior to the 2019 PBR Global Cup USA, Parsonage also rode on Team Canada for the 2018 edition of the event in Sydney, Australia, going a perfect 3-for-3.

Hansen returns to Team Canada after qualifying for his second-consecutive Wrangler National Finals Rodeo (NFR) in 2019.

Making his debut at the Global Cup in 2019, Hansen led Team Canada, adding two scores, including an 87-point trip on Bottoms Up.

Of the seven men set to travel stateside, Shay Marks (Sunnybrook, Alberta) will make his debut at the event akin to the “Olympics of bull riding.”

For Marks, the selection came after the Albertan had a banner year in 2019.

After undergoing reconstructive shoulder surgery in 2017, the now 23-year-old did not return to PBR competition until January when he made an explosive statement at his first event back.