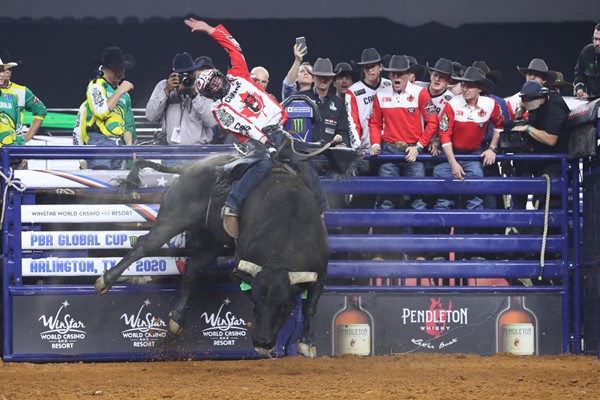 The seven-man Canadian contingent representing the Maple Leaf was the team the other four nations were chasing the majority of the night.

The Canuck team got off to a hot start, with the country’s first two riders covering their bulls.

The performance comes as Team Canada looks to rebound from its dreadful performance at the 2019 PBR Global Cup USA when they finished sixth.

Team USA Eagles, led by a dominant Jess Lockwood (Volborg, Montana), surged to an early lead at the event, topping the leaderboard at the “Olympics of bull riding” after the opening rounds of competition.

The home-nation favorites, who rose to the top of the leaderboard on the night’s penultimate bull, first scored when Cole Melancon (Paris, Texas) covered Top Down (Rockin R Bucking Bulls) for 86 points.

Lockwood, the next Team USA Eagles rider to climb into the chutes, then brought the raucous crowd to a roar by etching his name in the Global Cup record books.

Texas’ own Cody Teel (Kountze, Texas) was the final Eagle to score in Round 1. He rode Peep Show (Cornwell Bucking Bulls) for 82 points.

While Melancon wasn’t able to add another score to the total for the Red, White and Blue contingent, who were trailing only Team Canada, Lockwood once again struck at a pivotal moment.

Lockwood, who had broken his collarbone a year ago in this same arena at the 2019 PBR Global Cup USA, delivered a massive 88.5-point ride atop Red Dawn (Dakota Rodeo/Chad Berger/Clay Struve/Heald Pro Bulls) to propel Team USA Eagles to the top of the event leaderboard for the first time.

Third following the opening night of competition is Team Australia, 177 points behind the No. 1 spot.

Jose Vitor Leme (RIbas do Rio Pardo, Brazil) was the lone rider from the South American nation to deliver a score. His 8-second effort, however, was for a monstrous 90.25 points aboard Rising Sun (Dakota Rodeo/Chad Berger/Clay Struve/Heald Pro Bulls).

The 90-point ride was both Leme’s second in Global Cup competition, and the second ever witnessed at the international, nation vs. nation bull riding event before Lockwood posted his matching score.

As one of the two riders selected to compete in the bonus round, Durazo seized his opportunity and put the nation’s first points on the board in riding Cochise (Jane Clark/Gene Owen) for 89 points, the high-marked ride of his career.

Also delivering just one qualified ride on a night that was dominated by some of the PBR’s rankest bovine athletes, Team USA Wolves rounded out the leaderboard in sixth.

Seeking to climb the standings on Championship Sunday, the Wolves trail the top ranking by 261.5 points.

Fans can relive all the action from the event’s first night starting at 8:00 a.m. EST tomorrow, Sunday, February 16, at RidePass.com or via the mobile app.