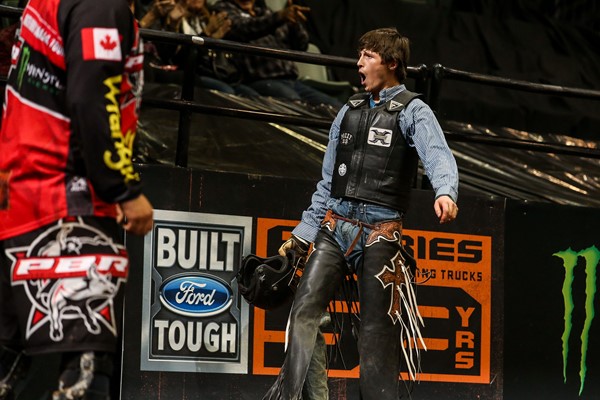 In the tour’s tenure, Abbotsford is the lone city to welcome the Monster Energy Tour in each of its five years of operation. Each stop in the British Columbia city played a crucial role in shaping the national title race.

In 2019, Garret Green (Meeting Creek, Alberta) went a flawless 2-for-2 to win his career-first Canadian Monster Energy Tour event in Abbotsford. His 84.5-point ride on Mogely (X6 Ranch Bucking Cattle), and 87.5-point trip on OMB Legal Issues (Wilson Rodeo) earned a massive 530 Canadian national points and propelled him to No. 7 in the nation.

The event was also a crucial stepping stone in Brock Radford’s (De Winton, Alberta) return from injury. Sidelined the entirety of the first half as he recovered from knee surgery, the Albertan finished second to rise to No. 6 in the nation and become a contender for the year’s national championship.

Jared Parsonage (Maple Creek, Saskatchewan), the 2018 event winner, also recorded a crucial Top 5 finish at the 2019 Abbotsford Classic to hone in on the nation’s No. 1 ranking. While he remained No. 2 in Canada following the event, he decimated then No. 1 Dakota Buttar’s (Kindersley, Saskatchewan) lead from 122.51 to 42.51 points.

Following the Abbotsford event, what was one of the most intense national title races in league history, continued to unfold as the world’s best battled it out to be crowned the 2019 PBR Canada Champion.

Swearingen had entered the event No. 4. He went a perfect 4-for-4 to win the Canadian Finals and erase a 689.57-point gap to emerge the 2019 PBR Canada Champion by 450.42 points over runner-up Buttar.

The bull riding action begins at 7:00 p.m. PT on Saturday, October 17 at the Abbotsford Centre. All riders will attempt one bull each in Round 1 on Saturday. The Top 10 will then advance to the championship round later that evening for one more out and a chance at the event title. In addition to competing for points towards the Canadian national standings, riders will also vie for crucial points towards the World Finals.

Tickets for the Abbotsford Classic go on sale Friday, January 24. They range in price from $25 to $100, and can be purchased online at Ticketmaster.ca or at the Abbotsford Centre box office.