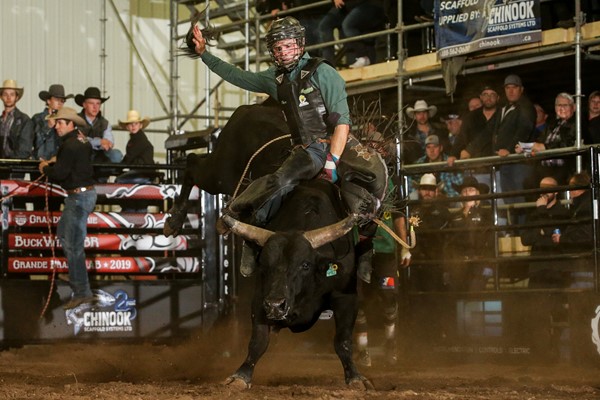 As part of the 2020 Grande Prairie BuckWild, new health and safety measures will be instituted. The new fan safety protocols for the event include:

While the event will mark the first-ever Monster Energy Tour stop in Grande Prairie, the Swan City is no stranger to the edge-of-the seat adrenaline experienced at a professional bull riding event.

Last season, in 2019, the PBR debuted in Grande Prairie, with the event then part of the developmental Touring Pro Division.

Positioned near the end of the 2019 schedule, the intense competition in Grande Prairie foreshadowed one of the most fiercely contended national championship races in league history. While Parsonage and Dakota Buttar (Kindersley, Saskatchewan) entered the season-culminating PBR Canada Finals ranked No. 1 and No. 2 in the nation, within a slim 32.49 points of one another, young gun Daylon Swearingen (Piffard, New York) completed one of the most riveting come-from-behind surges in history with a dominant performance.

In addition to marking the first-ever PBR Canada Monster Energy Tour event in the city, the Grande Prairie BuckWild on Oct. 2-3 will also feature the third-ever 5/5 Bucking Battle in the nation’s history. This special round pits the Top 5 riders from the national standings against the Top 5 bovine athletes bucking in the event, competing for additional national points and prize money. After Radford won the first 5/5 Bucking Battle in January in Calgary, Garrett Green (Meeting Creek, Alberta) was top cowboy in the most recent iteration of the special round.

The bull riding action begins at 7:00 p.m. MT on Friday, October 2, and Saturday, October 3 at Revolution Place. All riders will attempt one bull each in Round 1 on Friday, followed by the 5/5 Bucking Battle. On Saturday, after all entered riders attempt one additional bull each in Round 2, the Top 10 will advance to the championship round later that evening for one more out and a chance at the event title. In addition to competing for points towards the Canadian national standings, riders will also vie for crucial points towards the World Finals.

The 2020 slate of events marks the fifth season for the Monster Energy Tour as a unified competitive series traveling across the country. After visiting the likes of Calgary and Lethbridge, Alberta, the season is anticipated to culminate in Saskatoon, Saskatchewan for the 2020 PBR Canada Finals on November 13-14. All future PBR Canada events are subject to change given the evolving regulations regarding the COVID-19 (coronavirus) pandemic.