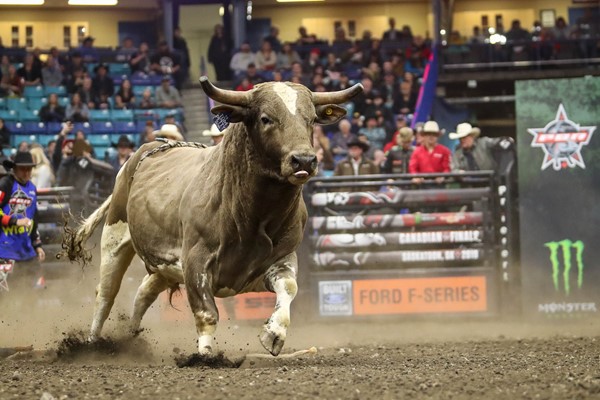 The Top 13 bulls in PBR Canada competition will compete for the title of 2020 PBR Canada Bull of the Year on Nov. 5-7 in Grande Prairie, Alberta. Photo: Covy Moore/CovyMoore.com.

In addition to receiving the coveted buckle, the Bull of the Year will also be presented with a $2,500 bonus.

Despite the abbreviated season, Flying Four Bucking Bulls’ Finning Lil Shorty delivered three head-turning trips in 2020. Improving each out, the bovine athlete began the season with a 43-point score in December at the Touring Pro Division stop in Lloydminster, Alberta.

Finning Lil Shorty next bucked at PBR Canada’s historic return to competition in July inside ENMAX Centre in Lethbridge, Alberta. Matched up with Garrett Green (Meeting Creek, Alberta), the two teamed for an event-winning 88-point score, as the 2019 PBR World Finals bucking bull was marked 43.5 points.

Happy Camper, a striking brown bovine, will be seeking history at the sport’s Canadian title event, attempting to become the first two-time PBR Canada Bull of the Year in league history Nov. 5-7 in Grande Prairie.

The 2018 PBR Canada Bull of the Year and three-time PBR World Finals selection bucked four times across all levels of competition in 2020.

Regarded as “the Bucking Sensation from the Two Bit Nation,” Happy Camper began the unprecedented season with a 43-point trip with Jared Parsonage (Maple Creek, Saskatchewan) at the season-launch Monster Energy Tour event in Calgary in January, as the stoic cowboy reached the 8-second whistle for 88 points.

Happy Camper then posted a 43.5-point score in Lethbridge before delivering his best trip of the year at September’s Touring Pro Division event in Ponoka, Alberta, a 44-point score compliments of his 6.78-second buckoff of Dayton Johnston (Milk River, Alberta).

Tykro Pound Sand, a bull known for propelling riders to victory, including reigning PBR Canada Champion Daylon Swearingen, will be seeking glory of his own in Grande Prairie, attempting to earn his career-first Bull of the Year title.

The powerful black and white bull is one of only a few Canadian bovines to have been selected to compete in the United States in 2020, bucking twice at the final regular-season Unleash The Beast event of the year in Nampa, Idaho.

In his home nation, where he bucked five times across all levels of competition, Tykro Pound Sand was twice marked a head-turning 44 points, both elevating Canadian No. 1 Dakota Buttar (Kindersley, Saskatchewan) to event wins.

The two first teamed for an 87.5-point score at the January Monster Energy Tour event in Calgary, before Buttar again reached the requisite 8 aboard the Wild Hoggs’ bull for a monstrous 90.5 points in Stavely, Alberta to win the prestigious Glen Keeley Memorial.

In a unique format, the 2020 PBR Canada Finals will be comprised of four events.

The season-culminating weekend will get underway with the PBR Shell Rotella Challenge on Thursday, November 5 at 7:00 p.m.MT. All 25 riders will compete in Round 1, with the Top 10 advancing to the championship round.

On Friday, November 6 at 7:00 p.m.MT, the PBR Wrangler Chute Out will be held at Revolution Place, again featuring all 25 enter riders in Round 1, followed by the Top 10 riders competing in the championship round.

For the final day of the 2020 PBR Canada Finals on Saturday, November 7, eventgoers in Grande Prairie, and viewers around the world on RidePass and TSN will witness a double-header.

The evening’s events will begin with 25-rider PBR Cooper Tires Classic at 7:00 p.m. MT. Featuring one round, the event winner will be the high-marked rider of the event.

Following the PBR Cooper Tires Classic, the Top 15 riders in the national standings will advance to the final event of the 2020 season, the PBR Built Ford Tough Championship. In the season-culminating event, the 15 qualifying riders will face one final bull in an effort to be crowned the 2020 PBR Canada Champion.

The 2020 slate of events marks the fifth season for the Monster Energy Tour as a unified competitive series traveling across the country. All future PBR Canada events are subject to change given the evolving regulations regarding the COVID-19 (coronavirus) pandemic.