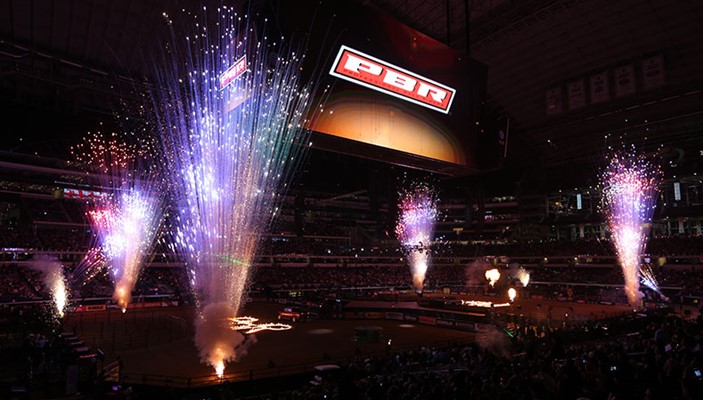 This time, facing gridlock in Nevada, PBR took a detour on the freeway to the Lone Star State.

PBR World Finals: Unleash The Beast – which for 26 straight years has been held in Las Vegas – will be relocated to AT&T Stadium in Arlington, Texas, November 12-15.

This blockbuster announcement, following a lightning-fast, Herculean collaboration among the state of Texas, City of Arlington, Dallas Cowboys, and PBR, was made this afternoon by PBR Commissioner Sean Gleason.

Gleason spoke to fans live on social media from the heart of AT&T Stadium, where PBR has competed the past 10 years, including the biggest event in the sport’s history when PBR hosted 46,000 fans at the Iron Cowboy in 2018.

World Finals, the richest and most prestigious event in bull riding, which offers a $1-million bonus and coveted gold buckle to the PBR world champion and a $300,000 check to the event winner, had originally been scheduled for T-Mobile Arena in Las Vegas November 4-8 and has been moved due to COVID-19 restrictions.

“The PBR World Finals, the biggest event in bull riding, will crown our next champion rider and bull in the NFL’s largest stadium in the heart of cowboy country, giving fans the sport they love in a comfortable, socially distanced environment,” Gleason said.

“We are very grateful to Governor Abbott and the state of Texas, who moved at lightning speed to make this happen, as well as our partners in the city of Arlington, the Visitors Bureau, and AT&T Stadium for welcoming PBR and our loyal fans for championship week.”

CBS Sports Network will televise all rounds of the PBR World Finals, in addition to pre-round shows previewing the action. The league’s OTT channel RidePass will also bring viewers all the action LIVE.

The next PBR Global Cup USA, which was to be held at AT&T Stadium in 2021, will relocate to Las Vegas and take place in the spring of 2021 in Las Vegas at a specific date, time and venue to be announced.

Fans will recall Sioux Falls as the place where in mid July South Dakota Gov. Kristi Noem triumphantly rode in Old Glory onto the dirt on her own horse, marking the first indoor ticketed sporting event since the onset of Coronavirus relegated fans seeking live sports to stay glued to their TV screens and mobile devices.

While Gleason was disappointed that PBR’s proven plan and private-public partnerships helping get state economies back on track – the kind of partnership Gov. Noem jumped at – had not been given any direct consideration by the state of Nevada, he’s very excited about the new temporary Texas locale for World Finals and associated events.

“If we are not allowed to conduct the PBR World Finals in our traditional home of Las Vegas, there is no better place than the largest stadium in North America, home to our marquee PBR Global Cup USA events as well as the largest single-day event in PBR history,” he said.

During World Finals week, fans can also attend the Women’s Rodeo World Championship at the Will Rogers Coliseum Complex in Ft. Worth. Competition begins on November 9 and will culminate with Championship Rounds held inside AT&T Stadium during the November 13-15 World Finals performances.

“As WCRA continues to lead the industry charge in women’s professional rodeo, we are proud to offer equal money in all disciplines and to highlight their efforts to millions on a CBS Television Network broadcast,” said WCRA President Bobby Mote.

“This event will place these athletes onto a historic stage with payouts and visibility in women’s rodeo have never been done before.”

Fans at the Fort Worth Will Rogers Memorial Center will also have the opportunity to attend the ABBI World Finals, where the world’s top 2- and 3-year old bulls compete in two rounds of competition for a chance to win the ABBI Classic Champion title and $100,000.

Prior to that, PBR Direct 4-Day Packages will go on sale September 28-30, with PBR Direct Single Day tickets on sale October 1-2.

Tickets can be purchased at the AT&T Stadium Box Office, online at ATTStadium.com or SeatGeek.com, or via the phone to PBR Customer Service at (800) 732-1727.

PBR has high hopes to bringing its marquee event to a state with such rich Western sports history.

“You could say this is the heart of cowboy country – in more ways than one,” Gleason said prior to today’s announcement where the Dallas Cowboys, for a few days in November, will be replaced by the cowboys of the PBR.