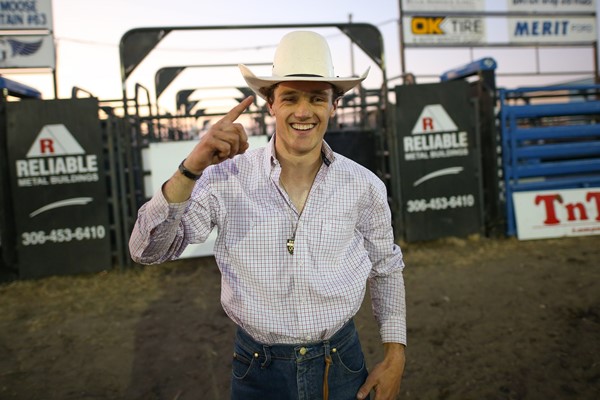 MANOR, Sask. – On Saturday evening, for the second time in his career, 2018 PBR (Professional Bull Riders) Canada Rookie of the Year Nick Tetz (Calgary, Alberta) rode his way into the winner’s circle, delivering a dominant 2-for-2 showing at the Manor Fairgrounds to win the Manor PBR Touring Pro.

The 21-year-old Albertan first turned heads in Round 1 when he covered Black List (R Saga Ranch Ltd.) for 85.5 points.

Tetz then remained perfect in the final round when he went the distance aboard Mogley (R Saga Ranch Ltd.) for 85 points.

Compliments of his efforts, Tetz earned a critical 31 national points to gain significant ground in the race for the 2021 PBR Canada Championship. After beginning the event ranked No. 9, Tetz is now No. 2 in Canada, a slim 7.67 points behind No. 1 Jared Parsonage (Maple Creek, Saskatchewan).

After bucking off Night Blood (Vold Rodeo) in the opening round, Roy captivated the raucous crowd at Manor Fairgrounds in the second round. Covering Kool Aid (R Saga Ranch Ltd.) for 85 points, Roy split the round win with Tetz and surged to second on the event leaderboard.

The 8-second effort was the third for Roy in as many outs aboard Kool Aid. After first riding the bovine athlete for 87.5 points in Prince Albert, Saskatchewan in May 2018, the Saskatchewan man had most recently covered Kool Air for 88.5 points at the 2018 iteration of the Manor event.

Roy is now tied for the No. 10 rank in the PBR Canada national standings, up six positions after beginning the tour stop ranked No. 16. He trails the top position by 37.17 points.

Should Roy capture the 2021 PBR Canada Championship, he would further establish himself as the nation’s winningest bull rider.

Fresh off his fourth-place finish the day prior in Czar Lake, Alberta, Smeltzer delivered the second-best score of Round 1 in Manor, marked 83.5 points aboard Trump Card (R Saga Ranch Ltd.).

Smeltzer left the Saskatchewan event having earned 13 national points, climbing four positions in the national standings from No. 12 to No. 8. Smeltzer now trails the Top 5 by 11 points, and No. 1 Parsonage by 29 points.

Buttar’s 8-second effort allowed him to collect 7 national points and maintain his No. 5 rank in the national standings. He is now within 18 points of the No. 1 rank.

Should Buttar repeat as the league’s national champion in 2021, he would become the first rider in history to accomplish the feat, and just the third rider ever to win the title multiple times, joining the likes of Roy and Lambert.

Rounding out the Top 5 in fifth was Mike Ostashek (Edson, Alberta).

Riding Burn Out (CS Bucking Bulls) for 80 points in Round 1, the 28-year-old earned 5 national points. He is now ranked No. 7 in Canada, 26 points behind No. 1 Parsonage.

In the bull pen, Uptown Funk (Vold Rodeo) was the supreme bovine athlete. Matched against Parsonage in Round 1, Uptown Funk sent the stoic Saskatchewan man to the dirt short of the 8-second whistle for a 43.5-point score.

PBR Canada’s Touring Pro Division next travels to Magrath, Alberta, and the Two Bit Ranch for the Celebration for the Two Bit Nation on August 5. Action gets underway at 7:00 p.m. MDT.